Based on an original production by Francesca Zambello 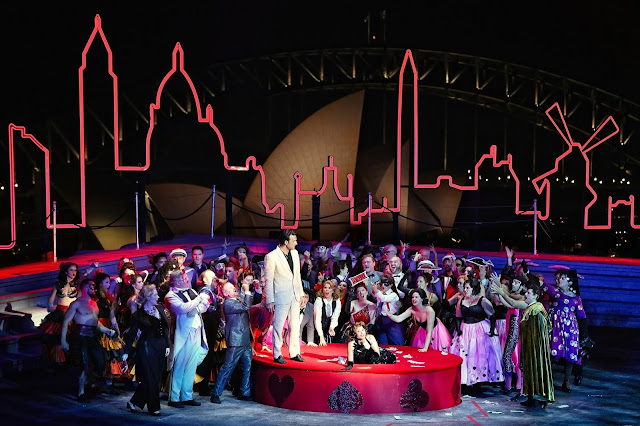 When director Francesca Zambello and designers Brian Thomson and Tess Schofield conceived their 1950’s vision of “La Traviata” for the inaugural Handa Opera on Sydney Harbour in 2012, they created a benchmark for a succession of open-air opera productions that have pushed boundaries for the presentation of outdoor opera. As a result the annual Handa Opera on Sydney Harbour productions have become International destination events.

Director, Constantine Costi, has brilliantly reworked this production for the 2021 season, taking advantage of lessons learned from subsequent productions to up the ante on the visual and emotional aspects of what was always a spectacular production.

Brian Thomson’s  remarkable sloping  silver-mirror stage setting,  dominated by the huge crystal chandelier that will later allow Violetta to soar high above the audience  during her triumphant  “Sempre Libera”, now sports a silhouette of  the 1950’s Paris skyline which changes colour  to match the mood of each scene.

Later when Alfredo (Rame Lahaj) confronts Violetta in the casino, the decadence of the life to which she has returned is emphasised with a spectacular floorshow for which the dancers are costumed in lurid matador outfits while the rest of the guests wear fancy dress and waiters spray champagne into the audience.

Costi’s direction is just as successful with the more intimate scenes where his use of an oversized silver couch to focus attention for his staging of Georgio Germont’s (Michael Honeyman) confrontation with Violetta, and his staging around the black satin draped bed for Violetta’s death scene is masterly, although his failure to provide a more inventive solution for the lack of a front curtain for the very final moments of the opera was a disappointment. Simply having  Violetta get out of her deathbed and walk off stage in full view at the end of the opera was clumsy and broke the carefully crafted spell.

As the glamorous courtesan, Violetta Valery, Stacey Alleaume gives the performance of her career.  Every inch the glamorous courtesan, Alleaume occupies the vast stage with impressive authority. Her singing is confident, secure and thrilling throughout, as is her acting, particularly during her confrontation with Germont, and in her final deathbed scene with Alfredo.

Dark and handsome, Rame Lahaj brings a fine voice and considerable presence to the role of the besotted Alfredo Germont. Both vocally and physically he and Alleaume are well matched, and offer captivating portrayals of the chemistry and tensions between the two lovers.

Particularly impressive with this production is the success of John Rayment’s superb lighting design in focussing the audience attention and creating memorable visual moments, while the superb clarity of Des O’Neill’s stunning sound design captures with superb clarity the full beauty of each singer’s voice, even making it possible to savour the instrumental nuances achieved by the musicians of Brian Castles-Onion’s superb orchestra in interpreting Verdi’s glorious score.