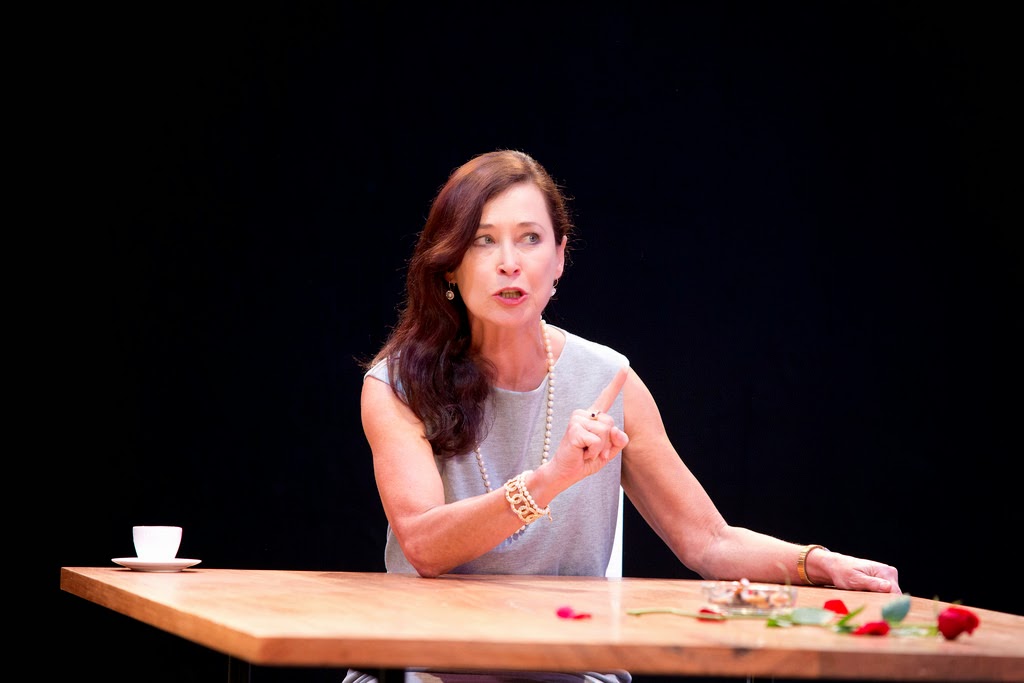 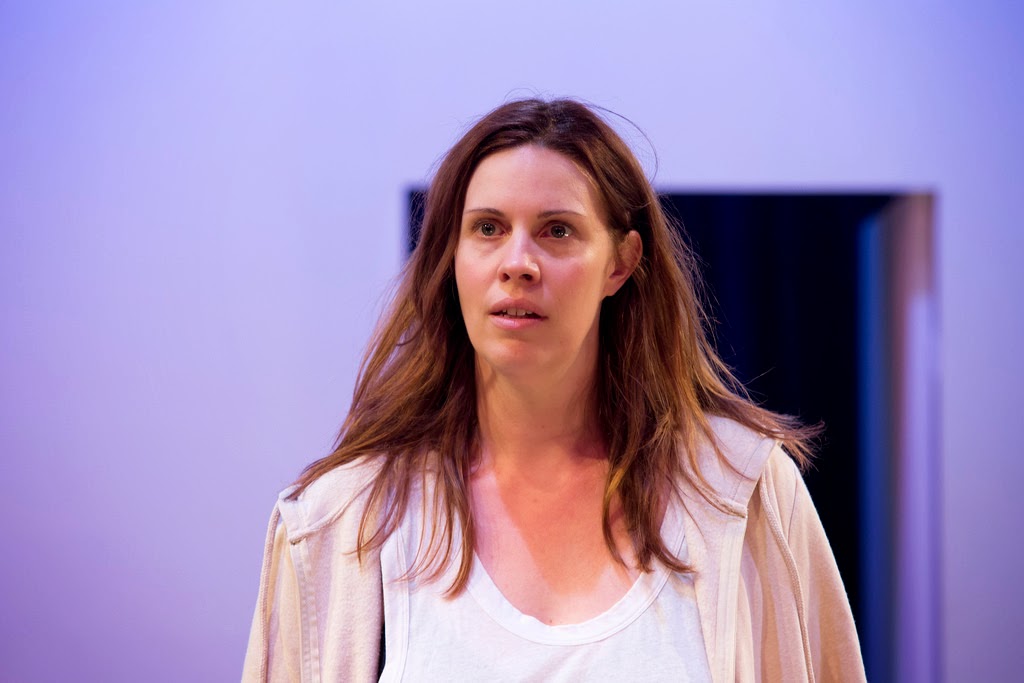 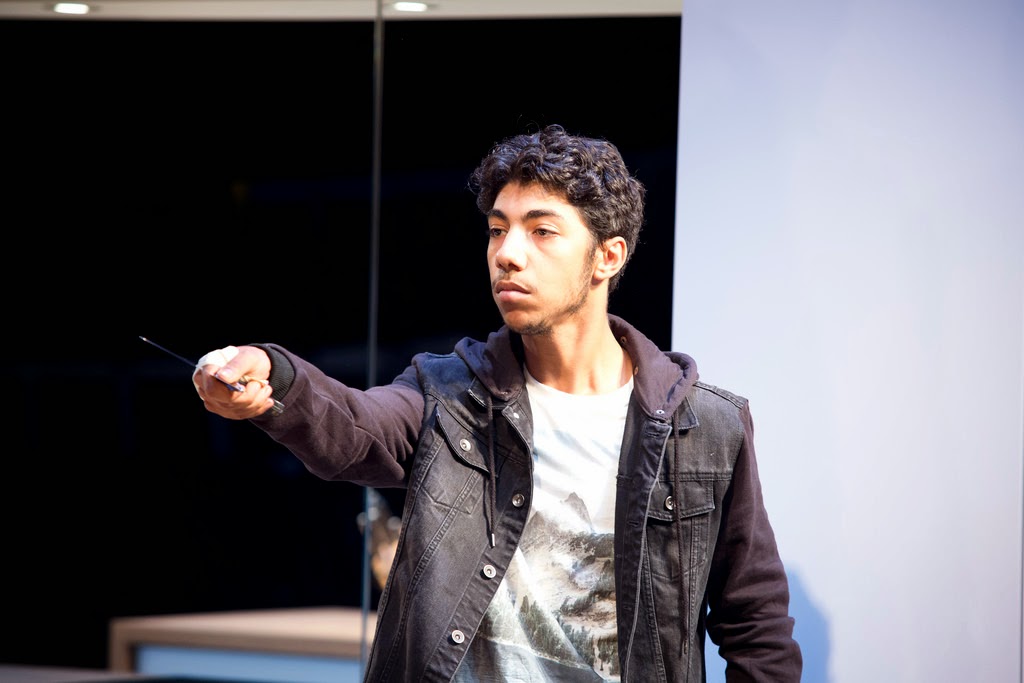 But instead of taking place in the kind of Ancient Greek palace that we might imagine if we think of the Parthenon, massively dominating Athens still today, we watch the verbal and physical violence play out in a minimally furnished family or breakfast room, and later in a slightly more upmarket kitchen (with an island workbench and extensive cupboards).

Revolves are now the in-thing (since Andrew Bovell’s Holy Day, I suspect), and in this case Ralph Myers’ design works very well indeed.  The play takes place twice, the first half hour focussed on Elektra in the family room; the second half hour repeating the action, but focussed on Orestes in the kitchen – where there is a knife block.

He has also brought a handgun and secretly hidden in a cupboard, prepared to avenge his father’s murder, as his elder sister had told him to do when she sent him away to protect him from Aegisthus eight years previously, when he was still only an eleven-year-old.

We are in modern suburban Australia, with something like a professional woman trying to keep herself and her family together, or at least keeping up appearances.  Her youngest polite daughter tries to keep out of the way of the worst of the continuing conflict, yet can’t help being attracted by Aegisthus’ predatory attention.  Her other surviving daughter has become foul-mouthed and rebellious, focussed obsessively on her mother’s calumny, and has refused to reveal the whereabouts of her only son.

Orestes’ return inevitably presages the tragic consequences of past action.  In the Ancient Greek context, of course, it is the demand for human sacrifice made by the gods which is the root cause of the tragedy of the human condition.  In this modern setting, Agamemnon takes all the blame for the sacrifice of Iphegenia from Klytemnestra’s standpoint, while she takes all the blame for the murder of their father in the eyes of Elektra and Orestes.  Gods don’t get a look in nowadays.


The writing and production of this play is an ambitious and risky project.  Does it entirely succeed?

The production certainly does.  We are held in the grip of the conflict situation – except briefly when people laughed as Orestes continued to stab, and stab, and stab Aegisthus.  Half a dozen stabs were believable, even though we knew that the horribly long sharp kitchen knife was not really piercing Ben Winspear, despite how it looked.  (Fight director Scott Witt deserves credit here).  But the next half a dozen went over the top.  Even so, the laughter faded as another half a dozen stabs, and another, meant we could not look away.

At this point I was reminded of the obsessive murder of his mother by an adult son which took place here, in modest Canberra, some years ago.  The perhaps schizophrenic son stabbed his mother more than 50 times, according to news reports.

The revolve and the action being repeated as seen from behind the scene worked brilliantly.  I remember a novel (French existentialist, I suspect) which described the same scene three or four times, each from a different character’s physical and mental perspective.  That struck me as an interesting idea, but not much more than playing an intellectual game with the reader.

In Elektra / Orestes the point was that in the second half we discovered what was really happening in the kitchen which we had not known while watching the first half – and it worked because dramatically the second half developed our understanding of the plot and of each of the character’s viewpoints, which we thought we had understood before.  The structure of the drama was strengthened in this way, reaching the climax we might have expected, but with unexpected personal elements – such as the importance to Orestes of his soft-toy rabbit.


But I wonder why a play, written by two modern Australian women – Aboriginal Jada Alberts and non-Indigenous Anne-Louise Sarks – kept the names and key elements of the Ancient Greek myth.  Were these meant to be modern Greeks?  How could a Queen and her family be living in such mundane circumstances?  Were we supposed to be watching a realistic story of a modern family, since the attitudes of the children were understandable considering what their mother and her lover had done?  But how could this be real in modern times, without their father having been arraigned for murdering his daughter Iphegenia, and their mother being arrested for murdering her husband (even if she acted partly in the belief that he was a threat to the safety of her other children)?

I had no problem seeing the issues of family violence exposed by the play.  That’s a tremendously valuable aspect of the writing and its presentation on stage.  But I found myself not connecting emotionally as I would like to have been able to do, because the myth from the ancient past and such a different culture was too literal.  So I began thinking about how it might be better done.

This Elektra / Orestes can be seen as part of the long tradition of representing the myth, starting from the 5th Century BCE Aeschylus, then Sophocles and Euripedes, but particularly in the 20th Century the American Eugene O’Neill’s trilogy Mourning Becomes Electra. http://gutenberg.net.au/ebooks04/0400141.txt

O’Neill finds a parallel in American history with the Trojan War – the American Civil War – and covers the years 1865 – 1866, when Brigadier-General Ezra Mannon comes home to his wife Christine and his daughter Lavinia.  Mannon’s mansion has a “white Grecian temple portico with its six tall columns [which] extends across the stage” which was correct for the American South (and is still used on MacMansions today in Australia!).  The characters have names which are appropriate for the period, and they speak American English of that period according to their class and racial background.  The three plays – Homecoming--A Play in Four Acts; The Hunted--A Play in Five Acts; The Haunted--A Play in Four Acts – parallel the plays by Aeschylus, but the reference is not made explicit.

Mourning Becomes Electra made O’Neill’s name as the great American playwright in 1931.  This was because Electra in the title made people try to work out what his play meant.  When the connection to the Electra / Orestes myth was thought through, people could see the play was a tragedy – not just for the characters in the story, but because Lavinia and her brother Orin represent the failure of the American Dream.  This is Lavinia’s last speech, to the old servant/retainer Seth:

LAVINIA--(grimly)  Don't be afraid.  I'm not going the way Mother
and Orin went.  That's escaping punishment.  And there's no one
left to punish me.  I'm the last Mannon.  I've got to punish
myself!  Living alone here with the dead is a worse act of justice
than death or prison!  I'll never go out or see anyone!  I'll have
the shutters nailed closed so no sunlight can ever get in.  I'll
live alone with the dead, and keep their secrets, and let them
hound me, until the curse is paid out and the last Mannon is let
die!  (with a strange cruel smile of gloating over the years of
self-torture)  I know they will see to it I live for a long time!
It takes the Mannons to punish themselves for being born!

Maybe Jada and Anne-Louise were not trying to write a play of such monumental proportions, but Lavinia is not so far from their Elektra (though I think their Orestes deserves more sympathy than O’Neill’s Orin).  But if they were wanting to put our feelings and understanding of the tragedy of family violence on stage at a higher level, they need to find a story from our history on which to turn the blowtorch of ancient myth.

The story of Jandamarra (http://www.bungoolee.com.au/index.php/jandamarra/) could be a good place to begin, for example.  If the family story in Elektra / Orestes represents the extension of the ancient Greek myth into the family violence we see in modern times, surely there might be an even more powerful drama in another 21st Century family perhaps entailing myth from the European and Aboriginal cultures, and the real history of the Bunuba man Jandamarra from 120 years ago.

This would be an equally ambitious and risky project, even more monumental in proportions.  Elektra / Orestes is an excellent start, but I feel the tragedy of family violence needs to be brought closer to home.


All production photos by Lisa Tomasetti