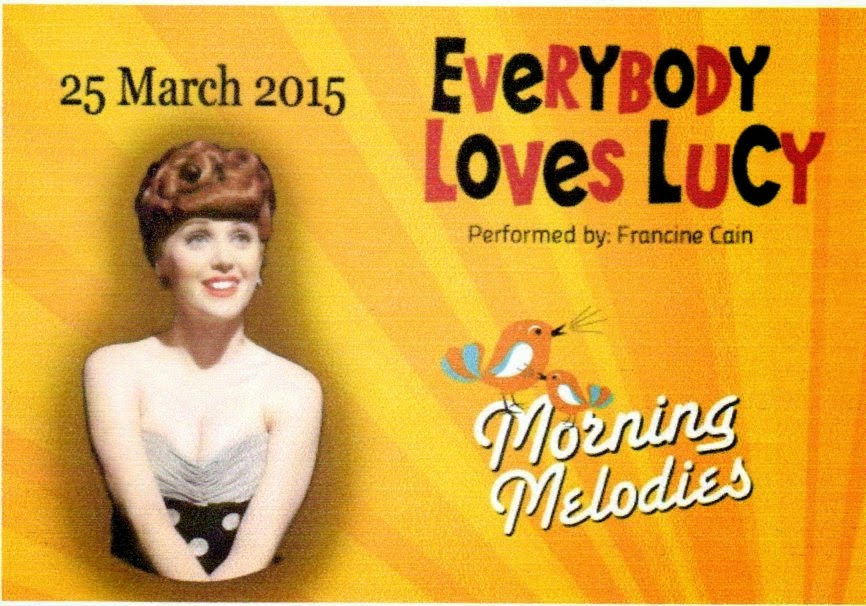 Like most people of my generation, I have fond memories of Lucille Ball and Desi Arnaz and their TV show, ‘I Love Lucy’, from the early days of television in Australia.  That does make it a little difficult to accept a modern actress playing Lucille Ball and the character, Lucy, on stage but Francine Cain does it rather well in ‘Everybody Loves Lucy’.

It’s a curious show that, while entertaining, doesn’t dig deep enough into the background of the show or the performers’ lives.  Mention is made of their marriage breakup but we’re only told that Ball left her husband because Arnaz couldn’t take being a success.  We don’t get his side of the story and he disappears early in the show which then concentrates on Lucille Ball only.

The story is interspersed with songs sung very well by Francine Cain.  Lucille Ball was not known for her singing so I assume the songs were added to give this show some variety.  The song, ‘Make Someone Happy’ from the 1960 musical, ‘Do Re Mi’, becomes a repeated theme for this show but was never associated with Lucille Ball in real life.  It is at least chosen from a relevant time period.  Only at the end of the show is a song associated with Lucille Ball used – ‘Hey Look Me Over’ from the musical ‘Wildcat’ which Ball appeared in on Broadway in 1960, the year of her divorce from Arnaz.

It was fun, however, to see a few of the famous comedy sequences from ‘I Love Lucy’ recreated and Francine Cain does them very well.  Anthony Harkin is a very good Desi Arnaz, too, and his piano accompaniment for the songs throughout the show is excellent.  Helen Dallimore’s direction is tight and moves the show along at a good pace but the sound amplification on the show was uncomfortably loud.

I liked the additional character of a TV-watching housewife of the period giving her opinions on the show and the actors, assuming the stars must be happy together in real life because they were portrayed as so loving in the TV show.

The show as played at the Q Theatre was exactly an hour long and the minimal detail left me a bit unsatisfied.  I wondered if there is a longer version of the show.  On the Q’s website, the detail about the show says, ‘We are introduced to a woman, who could make the work laugh while the actress was crying inside, a woman who was not just a clown but a voice for independence’.  The show didn’t go into all that in any detail and might have been more satisfying if it did.