For anyone born after the 1980’s it must be hard to comprehend the pall that the spectre of AIDS cast over humanity. A time when the very diagnosis of AIDS was tantamount to a death sentence.

Born in 1987, the year in which the greatest number of people died in Australia and the U.S. as the result of AIDS related illness, and after learning that a number of his friends had become HIV positive, dancer/choreographer James Welsby created his dance work, “HEX”, in an attempt to make sense of the epidemic, and to hopefully better understand the present rise of apathy towards HIV/AIDS amongst his peers.

Utilising three dancers, himself, Chafia Brooks and James Andrews, together with a dramatic  soundscape by Claudio Tosco, sensitive lighting design by Rose Connors Dance, a dance vocabulary drawing primarily on popular club dance moves, together with a  good deal of chutzpah and imagination, Welsby has created an intriguing work, which, even if it does not provide answers, will certainly go a long way towards achieving his secondary aim of creating an inter-generational conversation about AIDS history. 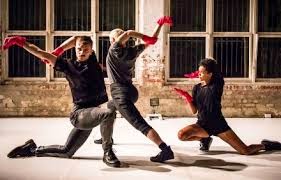 The work commences with a recording of Peter Allen singing “Everything Old is New Again”. Towards the end of the song the recording grinds to a halt, as Brooks and Andrews take the stage, separated from each other by two corridors of light. Welsby, wearing a Grim Reaper costume and mask, appears and menaces the others. After a few minutes, Welsby discards the costume with the exception of the mask, which remains a constant through-out the work, suspended centre stage.

The three perform a long series of complicated disco moves, moving in unison. Then follows several intriguing sections, which, although the significance of what they attempt  to convey was not always clear, were none-the-less interesting for their theatricality and staging. 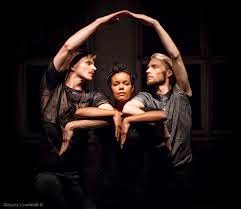 In one section, two male dancers growled into each other’s faces.

In another, perhaps the most successful section of the work, the two male dancers stood either side of Brooks and together the three performed a series of lovely, intertwining arm movements to the music of “I’ll be Seeing You”.

Another section, performed to an electronic version of “Another One Bites the Dust” involved scattering dozens of red rubber gloves around the stage to signify souls lost to the epidemic.In the final startling moments of the work, the choreographer exposed his anus to the audience in a gesture, perhaps of insult, invitation or maybe a reference to the source of the epidemic.

Although, not all the ideas in “HEX” work, it is an admirable attempt to address a difficult topic through dance. One looks forward to seeing more of Welsby’s creations.