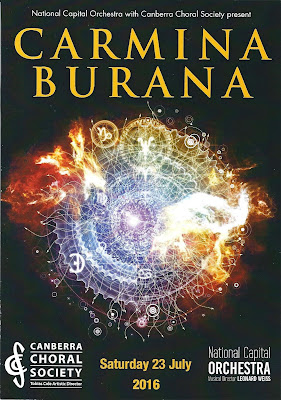 The vast number of chairs and music stands onstage at the Llewellyn Hall prior to the start of this National Capital Orchestra and Canberra Choral Society combined concert made it clear that this was likely to be quite an event and so it turned out to be.

The Prelude To Lohengrin was nicely played by the orchestra but the item’s brevity seemed to catch the audience off guard as there was no applause at the end.

Sean O’Boyle’s River Symphony was commissioned by the Brisbane River Festival and premiered outdoors in 2001.  It’s a beautiful and dramatic work conjuring up strong images of Australian rivers in all their seasonal moods and visual and aural beauty.  Leading the orchestra, choir, Canberra Brass and sopranos, Sarahlouise Owens and Susannah Lawergren, Leonard Weiss produced a remarkable performance, bringing out all the colours and atmosphere of this work.  It was thrilling to listen to and the audience responded with great appreciation at the end.

Carl Orff’s Carmina Burana, composed in the mid-1930s, has become a very popular concert piece over the years.  The opening sequence even turned up as the theme music of a TV coffee commercial some years ago!  Its dramatic and quirky characteristics make it a very enjoyable work for audiences, even if they don’t know what it’s all about.  Based on the Codex Buranus, a collection of poems and passion plays, written around 1230 AD, Carmina Burana is about love in all its forms, physical and spiritual, and even throws in a few drinking and gambling songs as well.

Soloists Tobias Cole, countertenor, and Jeremy Tatchell, baritone, – replacing an ailing David Greco – captured the spirit of the work especially well with their fine singing and ability to project the humour of their sequences.  Susannah Lawergren sang ‘In Trutina’ with great feeling and her short ‘Dulcissime’ sequence was exquisitely sung.  The children’s chorus, Turner Trebles, sang charmingly and with impressive precision.  The choral singing was mostly fine, clear and colourful, but at times seemed a bit under-powered against the orchestra.  Given the nature of this work, it would have been good to see more animation in the faces of the choir.  It was distracting to see three choir members taking a swig from water bottles while a soloist was singing.

Leonard Weiss conducted with assurance and overall this was a very entertaining performance of this work.  The audience clearly enjoyed it, giving very strong applause at the end.  A massive undertaking by all involved, it was a memorable evening of great music.

Len Power’s reviews can also be heard on Artsound FM 92.7 ‘Artcetera’ program on Saturdays from 9am.
Posted by Canberra Critics Circle at 3:02 PM