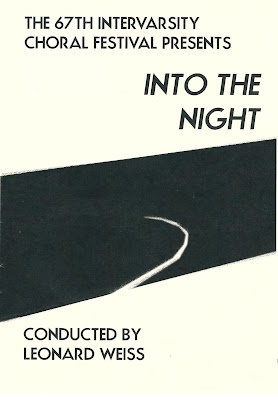 Every year since 1950, members of university choirs around Australia have gathered together in one of our capital cities for intensive rehearsals, workshops and fun, culminating in public performance.  This year the festival has been hosted by the Australian National University Choral Society (SCUNA) in Canberra.  The concert, ‘Into the Night’, at St. Christopher’s Cathedral was an opportunity for the public to see the results achieved by the nearly 60 choir members with a small orchestra, all under the capable baton of Leonard Weiss.

The evening’s program began with Eight Four-part Songs by C. Hubert H. Parry from 1898 which consisted of settings of various Renaissance poems and two by contemporaries of Parry’s.  The set was beautifully sung by the choir, creating a wonderful rich sound where the various parts could be clearly heard.

The second item was ‘Deconstruct A Chrysalis’ with music by Michael Winikoff to a poem by Leanne Veitch.  A somber yet dramatic work on the theme of ‘It Might Have Been’, the choir brought out the full colours of this rather moving piece.  While the sound of the choir was excellent, the space’s acoustics made it difficult to hear the words of the poem clearly.  Michael Winikoff himself was singing bass in the choir.

The next work, ‘Domine, quid est homo?’ by Mark Chapman (also a member of the choir) was originally written for inclusion in a concert of polychoral music performed by the ANU Choral Society in 2014.  Taken from one of the Psalms, the theme of ‘What Is Man’ is presented in a work that showcased the choir’s strengths in crisp and disciplined delivery.  It is a beautifully atmospheric piece to listen to.

The main work presented was Bruckner’s Mass In E Minor which was first written in 1866.  The Mass was written in the spirit of the Cecilian Movement, a group devoted to divesting church music of its symphonic and operatic elements, their ideal the works of Palestrina.  This influence is clearly heard in the work and the choir and orchestra performed it with great assurance.  The Gloria, Benedictus and Agnus Dei were especially well sung.

Leonard Weiss conducted the program very well.  There is nothing quite like hearing a massed choir singing live in a church.  You really had to be there!

Len Power’s reviews can also be heard on Artsound FM 92.7’s ‘Artcetera’ program on Saturdays from 9am.
Posted by Canberra Critics Circle at 10:26 AM