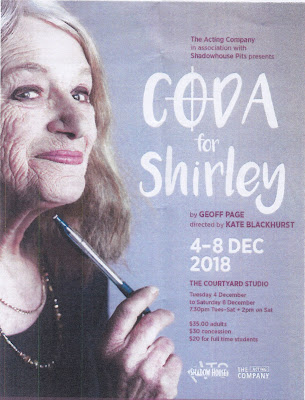 Coda for Shirley by Geoff Page.  Presented by The Acting Company in association with Shadowhouse Pits at The Courtyard Studio, Canberra Theatre Centre, December 4-8, 2018.

Coda for Shirley is perhaps the final part of a verse-play trilogy.

I missed Shirley and Lawrie, about their loving relationship (she in her seventies; he aged 81), largely on a romantic tour of Europe, some years after the death of Shirley’s dependable but less than exciting husband of 30 years, Ted.

In Cara Carissima (reviewed here December 17, 2015), we saw public servant Barry, Sarah’s husband, leaving her for Cara, his executive assistant; and leaving her with two sons.

Now Shirley, once again on her own since Lawrie accidentally drove into an elm tree and was killed, is in need of hip replacements and has had a heart attack, leaving her wheelchair-bound in a nursing home.  Knowing she may not live long, she writes to her daughters in a poem, about the terms of her will, leaving most of her estate directly to Sarah’s sons, rather than to the daughters.

So the stage has three settings: Shirley downstage centre with the will, in her wheelchair next to a small table; the two sisters upstage on our right at a kitchen bench with glasses and a supply of wine bottles; on our left a swinging garden chair for Jen, who with the boys had formed a modern quality rock band named Noise.

All speak in rhyming couplets: Shirley presents her poem, which she has written and sent to her daughters, directly to us; Jen speaks to us as if we are present at a funeral which she attends with the two boys (is it their father Barry’s funeral, or Lawrie’s – I lost track somewhere at this point); while Jane and Sarah talk to each other behind the fourth wall as we see them becoming tipsy discussing their mother and her will, trying to avoid (and failing) talking about men.

Though they can see how their mother’s late-in-life fling with Lawrie gave her a new sense of freedom after a conventional married life with their father Ted, Lawrie has upset the apple cart by leaving his estate to Shirley.

There is little action, each set position being lit independently, and so one has to concentrate essentially on the spoken words.  Though the sets and costumes were well presented, as time went along (for an hour and a bit) I felt I could quite happily close my eyes and listen.  I thought of the ABC ad for Radio National iView.

But more suitably I found myself misquoting Dylan Thomas – Shirley goes reasonably quietly into that good night – taking me into thinking of Under Milk Wood – A Play for Voices.

And I have seen this done before as a theatre production, as if the audience were in a radio studio but not able to see the performers. All That Fall by Samuel Beckett (which he said was “for voices not bodies” and was broadcast by the BBC in 1957) was presented by Pan Pan Theatre, Ireland, for Sydney Festival at Everest Theatre, Seymour Centre, University of Sydney (reviewed here January 18, 2014.) with the audience seated in rocking chairs among surround-sound loudspeakers.

This really did not work very well, but I suspect that Coda for Shirley would be very effective on radio.  Or it could be done with an audience as if in a studio, as The Goons did so succesfully.  Or by taking the idea of the All That Fall production, but gather the audience in small groups, each around a loudspeaker, as if each were a family listening in as we used to do in the 1950s.

After all, it is family that this poem-play is about – of the three generations (even four when Shirley recalls her father’s part in World War II) – and gathering around the wireless seems to me to feel just right.

Posted by Canberra Critics Circle at 12:37 AM