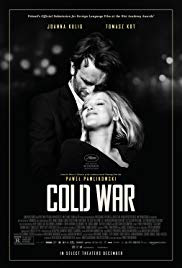 This story of the longing and desire of lovers who could no more live together than they could live apart is dedicated to the filmmaker’s parents. While it's not about his mother and father per se, writer-director Pawel Pawlikowski explores a tempestuous love affair like theirs from the perspective of his own late middle age.

The result is sublimely and coolly elegant. Shot in rich black-and-white on the boxy 4:3 Academy ratio, it looks the way home movies and still image photography looked at the time. And it is irresistible, a 1950s romance set to sultry jazz music and upstart rock n’ roll.

A relaxed and urbane Wiktor (Tomasz Kot) is touring the Polish countryside auditioning singers to join a troupe that will perform folk music blended with messaging to help build the new Polish communist state, when a sultry young blonde singer catches his eye. There is a certain something about young Zula (Joanna Kulig), the quality of her voice or her vivacity combined with the whiff of danger of someone who has spent time in prison. It makes Wiktor champion her talents, and fall in love.

The question is, however, were they ever meant to be. Is it personal whim or is it political circumstance that drives them apart, again and again?

During the time that Zula and Wiktor are trying to get it together, the communist machinery is setting up in Poland and throughout Eastern Europe, culminating in the wall in Berlin. Hardly circumstances favourable for this Polish couple, but when a door to freedom in the West opens, Zula rejects the opportunity.

Her resistance, which could be explained as youthful contrariness, seems inexplicable, but then Pawlikowski is less interested in providing answers than he is in creating a tribute to a love affair, and allowing the gaps in understanding to remain. Be prepared for some ellipses where the narrative seems to drop out of sight.

It is poignant to read that Pawlikowski’s parents died long ago, before Cold War hostilities between East and West were declared over in 1991.

In a way, this film is asking an age-old question: where do I come from? Parents were people before they became mothers and fathers, so what kind of people were they? They fell in love, they had aspirations and their union prevailed or it didn’t. Couples like Zula and Wiktor had geopolitical forces to deal with, in addition to each other.

Five years ago, Pawlikowski made a film, also in black and white, also stark and beautiful, about a young woman raised an orphan and on the point of taking her vows as a Catholic nun, who discovers that she is Jewish. This film, Ida, was also a memorable screen experience reflecting on Polish history post World War II.

The similarities probably end there, except that they each demonstrate the filmmaker’s flair for making black-and-white a complete cinema experience at a time the screen is dominated by bombastic blockbuster.

A letter to love in fractious times, Cold War makes no concessions to modern tastes for pace and colour and percussive editing, but is way powerful nonetheless. Yo yo yo.


Jane's reviews are also published at www.janefreeburywriter.com.au, and broadcast on ArtSound FM 92.7
Posted by Canberra Critics Circle at 3:12 PM