THE ILLUSIONISTS - Direct from Broadway 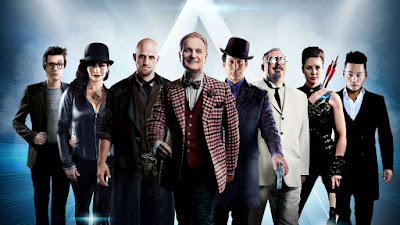 
Performance on 8th December reviewed by Bill Stephens
If you’re willing to have your mind boggled then this is the show for you. Eight world class illusionists, each subtitled with a label indicating their specialty, bring a twenty-first century spin to timeless classic illusions of the type which continue to delight and intrigue willing audiences.


This new iteration of “The Illusionists”, first seen in Canberra in 2015 as “The Illusionists 1903”,  has been touring the world ever since. Now commencing the Australian section of its world tour, with new settings, sexy “Hunger Games” inspired costumes and state-of-the-art lighting and technology, the show is even more astounding than before.
Mark Kalin (The Showman) and the gorgeous Jinger Leigh (The Conjuress), still head the cast list, and with good reason. Specialising in large scale illusions, Kalin’s ability to make the comely Leigh disappear right under the watchful eyes of a group of on-stage audience members, is jaw-dropping.  When she appears later in a dazzling red sequined gown, elegance personified, to dance with a floating yellow moonlike globe, Leigh is mesmerizing.
The rest of the cast are new for this tour and surely among the best in the business. Handsome and mysterious, An Halim (The Manipulator), whose almost unbelievable mastery of card manipulation takes the art to new heights. His act is enhanced by overhead cameras projecting images on to large screens above the stage to allow the audience to watch every movement. Elsewhere video cameramen dash around the stage, projecting real-time images onto overhead screens so that the illusions become even more unfathomable.
John Goodwin (The Daredevil) pays tribute to Harry Houdini by recreating his famous stunt of escaping from a straight-jacket. But Goodwin takes it even further by setting himself alight while suspended upside down above the heads of the terrified audience. You can actually feel the heat from the flames.


Cheeky Chris Cox (The Mentalist), astounds with his ability to read minds, Robyn Sharpe (The Warrior) confounds by recklessly plunging arrows into a cardboard box containing an assistant, and Kevin James (The Inventor) charms with a beautiful sequence in which he goes into the audience to select a little girl to whom he gifts a paper flower he has made float in front of her astonished eyes before turning it into a luscious red rose. Later he enchants another group of children by conjuring up a veritable snow storm.


Yes! The show does include a lot of audience participation, particularly children who jump at every opportunity to be involved, because they quickly pick up that they will be treated with respect and not embarrassed by participating. And because kids are so transparent and harder to fool, their astonishment at the illusions adds to the magic.
Keeping the whole show flowing and adding to the spectacle, dapper Jeff Hobson, (The Trickster) displays a collection of tuxedos dazzling enough to make even Liberace drool, while keeping the audience convulsed with his captivating line of cheeky double entendre.