Johan Inger is to ballet what Barrie Kosky is to opera. From the  thunderous opening bars of George Bizet’s  Carmen before the curtain rises one feels a sense of thrilling excitement, of bold invention and heart pumping expectation. Inger’s driving vision fulfils all this and so much more withSemperoper Ballet Dresden’s magnificent balletic interpretation of the story of the Sevillian cigarette factory worker whose powerful sexual allure incites the deadly passions of obsessive desire and jealous rage.
﻿

﻿A young boy enters with a ball.  A dark figure of portentous destiny appears and the curtain rises to reveal the guarded gates at the front of the cigarette factory. Inger’s Carmen is no faithful adherent to previous interpretations of the classic myth. His is a more portentious vision. Set against Curt Allen Wilmer’s astonishing design of moving structures to represent, factory gates, cells,  mountains and moving rectangular boxes as represention of the urgency of Don Jose’s escalating obsession, Inger’s thrilling choreography combines the exquisite gracefulness of ballet with the inventiveness and ground breaking radicalism of contemporary dance and the sheer muscularity and energy of physical theatre, The pas de trois with the captivating Ayaha Tsunaki as the seductive Carmen, Jon Vallejo as the beguiled Don Jose and Gareth Haw’s  arrogant and powerful Officer Zuniga. is more than a beautifully executed dance, but also an expression of status in dance. The first half of the ballet with its colour, spontaneity and the sheer vitality of Carmen’s red dress and the the sparkling jacket of the charismatic Toreador ( Christian Bauch) is a celebration of the fiery spirit of Bizet’s music and the Spanish  character. 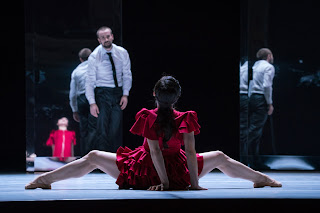 In the second half, the prophetic destiny of Don Jose’s descent into homicidal obsession presents a far darker aspect of the tragedy. It is the dolour of the Duende. Inger’s choreography departs from the aerial vitality of the dance of the toreadors to the despairing floor work of the tormented Don Jose. The innocent child watches on, powerless to affect the deadly consequence. The corps de ballet scramble across the stage as baying dogs, ready to snap and snarl at the spoils of destruction. Bizet gives way to the darker moods of Marc Alvarez’s sombre composition of impending doom and Tom Visser’s lighting lends a darker aspect to destiny’s inevitability.
Inger’s Carmen is no homage to past performances of the iconic opera. This is his intelligent re-imagining of the vulnerability of human nature. His choreography is visceral, and we feel the rivalry of the factory women, the machismo of the officers and the superiority and egotism of the toreadors. This is Inger’s brilliance, to fuse the many expressions of dance according to the emotive power of individual experience. His dancers embrace the vision with fervor. The styles excite the imagination, visually and  emotionally.
Ayaha’s Tsunaki’s Carmen is electrifying. Her seduction of Don Jose and Zuniga is tantalizing, erotic and willful as she leans back spread legged upon the floor or wraps herself around her victim with tempting intent. She epitomizes the sexual power of the woman and the unwitting agent of a violent and deadly destiny.
From the vicious confrontation of Carmen with another factory worker, or the sensuous teasing of Don Jose or the Toreador or the frantic pursuit between the moving towers of the set, Inger’s reinvention interprets a new language for the dance. Supplemented by Schtschedrin’s contemporary score, Bizet’s composition reveals a more complex motif. Semperoper Ballett’s Carmen defines a new and invigorating experiment in corporeal interpretation of myth and motive. It is th, Ayaha Tsunakirilling, illuminating and exciting. The familiarity of Bizet’s composition and the universally well-known story of Carmen and Don Jose appear as if realized for the very first time by a company that is certain to be the highlight event of the Adelaide Festival, alongside Barrie Kosky’s The Magic Flute.
The lengthy ecstatic standing ovations that both works received say it all!!
Photos by Ian Whalen