Sport meets dance in a side-splitting display of physical surprise and invention. Athleticism grapples with contemporary dance.in Un Poyo Rojo (The Red Rooster), a thrilling and hilarious dance work from Argentina. Nicolas Poggi and Luciano Rosso’s choreography invents a new and thrilling dance lexicon, leaping from the imaginative flights of comic originality. In a sweaty men’s locker room, two men face off in a macho ritual of one-upmanship in a phenomenal display of physical agility, lightning speed martial arts and parodied ballet moves. Under the direction of Hermes Gaido, Alfonso Baron and Luciano Rosso engage in an athletic contest of supremacy and one–upmanship Action and counteraction struggle for supremacy in a combination of physical theatre, martial arts, contemporary street moves and parodied ballet moves. Their agility and segmentation of separate parts of the body create a comical rivalry as each dancer twists, bends, turns, pirouettes and slides to outshine his rival’s moves. Their confrontations  are hilarious This is dance-up comedy extraordinaire, and an audience erupts into laughter at each feat of physical strength and corporeal contact. In a stunning display of athleticism, they slither and slide, wrap limbs around each other, preen like peacocks at a mating ritual and lock themselves into the grip of wrestlers. It is all done to comical effect. Masculinity and femininity are held to ridicule in Luciano Rosso’s posturing and Baron’s seductive sidling. Roles reverse and both dancers swap gender until the competition transmogrifies into an elaborate courtship in which rooster and hen play out their mating ritual. 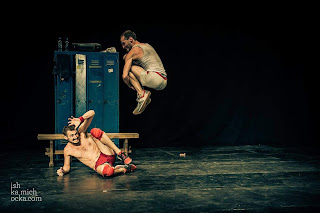 Teasing and testing gradually turns to a more sensual flirtation. Lips interlock in surprised attraction. The seduction is almost complete and the ritual continues to the sound of live radio, switching from channel to channel and song to song. The dance sweeps into the sphere of improvised movement, inspired by the unexpected sounds of the live radio accompaniment. Rosso sits astride a bench, displaying his unique skill as he “plays” a number of cigarettes protruding from mouth and ears. It is an hilarious symphony of cigarette notes. Gradually the cockfight turns to a more flirtatious dance of seduction and eroticism. Stereotype is vanquished and the myth of men’s stuff in testosterone- fuelled change rooms is turned upside down and inside out in this explosion of vitality and sensuality. 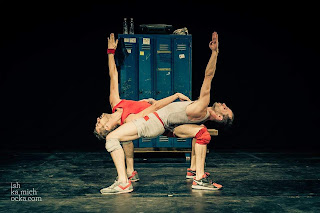 But wait! There’s more. As a high camp send-up encore, Rosso performs his hysterically funny solo accompaniment to the Spice Girls “If You Wanna Be My Lover”.  Eyes twitch, limbs jerk, and Rosso’s body become an orchestra  of jerk and twitch to the rhythm of the music. Un Poyo Rojo is mockery in motion, bursting with Argentine exuberance . YouTube if you need to. Un Poyo Rojo is the perfect remedy to wipe away the gloom.