A Man of Good Hope.

Based on the book by Johnny Steinberg. Directed by Mark Dornford-May.YoungVic and Isango Ensemble. Royalty Theatre Adelaide Festival 2019.  March 5 – 11 2019.

What is the hope of every human being? For Asad Abdullhahi it is to be free from fear and safe in his own land. On a raked wooden stage, bordered by percussion instruments, the eight year old Asad is confronted by eight hundred year old clan violence, when, contrary to Islam law, his mother is shot dead by the militia in Mogadishu during the Civil War of 1990.  And it is here that the hope of freedom and safety drives the young Asad on his dangerous Odyssey from Somalia to the refugee camps of Kenya, forced use as a child soldier and further into Ethiopia, eventually paying a people smuggler to help him enter South Africa. What drives Asad on is the fearful burden of loss—the loss of his mother, the loss of home and family and clan, the loss of property and money and the constant threat of violence and death, enveloped in a pall of fear.

This is epic theatre in the tradition of the great dramas of Bertolt Brecht, operatic in the passionate grandeur of spirit, tragic in its futile quest for life in a nation, torn apart by the clan system, apartheid ,corruption, poverty and crime. Throughout the perilous journey the tragedy of despairing hope is lifted by the cruel irony of the dream of a better life in America, the Land of the Free, where there are no guns and everyone is rich. “Are you sure of that?” author Johnny Steinberg asks the adult Asad during his interview in a car “for a quick getaway”.

In the play’s magnificent display of resilience, survival and the optimistic quest for a better life, Asad confronts resistance from other clans, prejudice against immigrants, threatening the jobs of South Africans, the violence towards family, death and the destruction of a dream. His first wife, a victim of the horror of female circumcision and the mother of his son returns to Somalia without Asad, whom she legally divorces after four years of separation.

After years of thwarted attempts to find family, establish a business, buy a truck, live in peace and provide for his wife, Asad marries a woman of another clan in a show of compassion. and eventually is granted immigration papers to the United States for himself, his new wife and her son. His story, unlike so many others, ends well.

Hope and despair reside side by side in Steinberg’s account of Asad’s tempestuous life. Hope springs eternal from Asad’s dream, through the words of Nelson Mandela, in the optimism, born of pain and grief that drives Asad on, and the belief that away from the violence, far from the corruption, free of fear, there is a land where one can be safe and succeed. 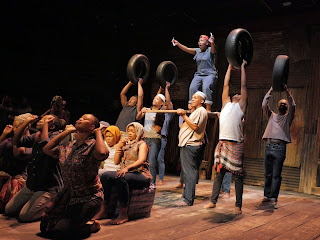 The hope bursts forth from the rhythms of the percussion and the jubilation of the dance. From opera to music theatre to the effervescent choral chants and stirring voices of the ensemble A Man of Good Hope sweeps the audience along , at times toe-tapping to the songs or drawn in to the unjust drama of the scene. Part agit prop,but without the harsh edge of didactic  judgement, A Man of Good Hope  upholds the  tradition of Brecht’s Epic Theatre, a plea for change and a call to action. In the theatre foyer ausdiences are invited to contribute twenty dollars for Amnesty International. It is a small price to pay to support this powerful, moving and yet uplifting production’s call for empathy and compassion.

“Will you buy my book when it is published”, the character of Steinberg asks the adult Asad at the end of the performance. Asad asks if the traumatic events of his life are in the book “Yes” Steinberg says. “Then no.” Asad replies. “Will you write about the other lives?” the young Asad asks. The lights fade to blackout .  We who live in the safety of personal freedom and enjoy the fundamental human rights, should hope that good may come to those who have scarce hope of a good life, free from fear and poverty. It is a lesson that A Man of Good Hope invites us all to learn.

Posted by Canberra Critics Circle at 10:34 AM