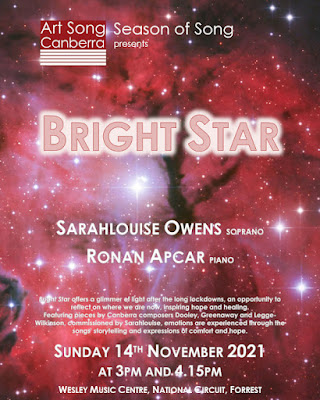 For the first concert after the Covid lockdown, Art Song Canberra presented soprano, Sarahlouise Owens and pianist, Ronan Apcar, at the Wesley Music Centre in Forrest in “Bright Star”, a concert of songs by living Australian composers.  Two of the composers, Michael Dooley and Margaret Legge-Wilkinson were present at the performance.

Sarahlouise Owens explained at the start of the concert that the songs had been chosen in a spirit of optimism and hope at the end of the lockdown.  They promoted connections with each other and the environment and a sense of looking forward as life goes on.

The first song, “Hymn To The Trinity” by Michael Dooley was a sensitive work with a Christian message that we are all one and need to unite in brotherhood.  Sarahlouise Owens sang it with warmth and clarity as well as a restraint that nicely underlined the emotions in the song.  There are some especially beautiful melodies in this work and they were well-played by pianist, Ronan Apcar.

The second work, by Margaret Legge-Wilkinson, was “Girls And Horses In the Fire”, based on a poem by Lisa Jacobson, written in a response to the Black Saturday bushfires of 2009.  This highly dramatic work full of intense emotions was very well sung by Owens and there was notably fine piano playing of the challenging score by Apcar.

Michael Dooley’s “Bright Star”, based on the poem by John Keats is a hauntingly beautiful work.  The music brings out the sensitivity of the words perfectly and it was given a luminous performance by Owens and Apcar.

Sally Greenaway’s “Cocooned For Breathing” was an unusual work for soprano, piano and singing bowl.  The bowl was played by Sarahlouise Owens while she sang.  The sounds produced by the bowl give the work a meditative quality and the overall effect of voice, piano and bowl was haunting and ritualistic.  It was an excellent performance of this unique and memorable work by the Canberra composer.

The final work, “To A City Cousin”, by John Martin celebrated the environment and was given a joyful and sunny performance by Owens and Apcar.  For an encore, Sarahlouise Owens gave a sensitive, heart-felt performance of the Irish song, ‘Bonny Portmore’.

This was a performance where all the elements came together especially well.  Ronan Apcar played superbly, Sarahlouise Owens sang beautifully and really connected with her appreciative audience.  It was a highly memorable concert.

This review was first published in the Canberra City News digital edition of 15 November.

Posted by Canberra Critics Circle at 8:48 AM