David Atfield is not the first to imagine that Michelangelo Merisi (Michele Angelo Merigi or Amerighi) da Caravaggio may have been homosexual.  In the 1986 movie Caravaggio (1h 29 min  18+), directed by Derek Jarman, “The volatile life of the eponymous 17th-century painter is gorgeously re-imagined through his brilliant, near-blasphemous paintings and flirtations with the underworld. With Tilda Swinton, Sean Bean, Robbie Coltrane, Michael Gough, and Nigel Terry in the title role.”
[  https://www.amazon.com/Caravaggio-Noam-Almaz/dp/B00241VL42  ]

At https://www.washingtonpost.com/wp-srv/style/books/reviews/caravaggio990711.htm Richard E. Spears wrote in 1999:
Fascination with Caravaggio's art and life is at an historic high, to judge from the quantity of writings about him, not just exhibition catalogues and scholarly studies but plays, mystery stories, novels and Derek Jarman's boldly homoerotic film, "Caravaggio." For the past year alone I count at least 25 new titles, including a thesis on "The Life and Legend of Caravaggio Interpreted through Fiction and Film." 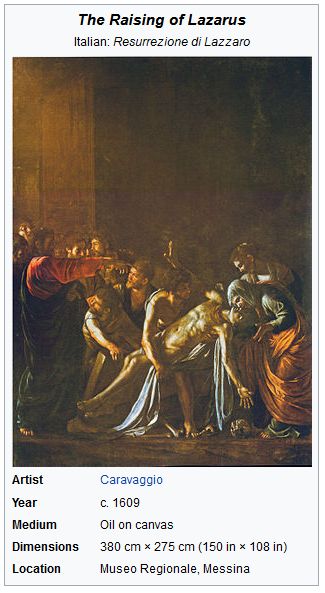 Michelangelo’s model for Lazarus, Gregorio, thinks that can’t be the artist’s real name because Michelangelo, who painted the Sistine Chapel, “has been dead for fifty years”.  Gregorio makes most of his money from being a “whore” for gentlemen.  He (and we) soon discover that this Michelangelo makes money being contracted by rich gentlemen to paint Biblical scenes which they donate to churches.  Though he’s not exactly a gentleman, a sexual relationship with Gregorio develops because, to the artist, his model is “beautiful”.

For Gregorio the money-making becomes problematic.  He reaches a point where he refuses to be paid for the work as a model; but does that mean Michelangelo should pay him for sex?  Or is there a sincere love between them – a ‘connection’, as Gregorio says?

So, from this angle, the play sheds light in our time on a broader question than just the acceptance of homosexuality, but even to the legal and political issue of the nature of consent.  When they both drink too much, jealousy and misunderstandings become violent.  Michelangelo might well have killed Gregorio  - reminding me of Kenneth Halliwell’s murder of the playwright Joe Orton; and of the women killed at the rate of one a week in Australia by men.

Atfield could have written a very good play about these real life matters, but this play is about the shades of light for which Caravaggio was so famous, and which shifted arts practice.  It was said that a Caravaggio painting was like a poem.  A poem uses words as the painter brushes on the colour – Caravaggio was said not to draw but only to work directly with the brush.  The imaginative use of words in poetry creates images and meanings out of the ordinary; while a whole poem can become a metaphor which changes the reader’s perception of the ordinary.

So a shift comes about in Chiaroscuro as Caravaggio works at re-creating the here-and-now Gregorio into Lazarus – what does the image of Lazarus mean?  Lazarus who has died and four days later is miraculously brought back to life by Jesus.  When Michelangelo killed his friend/rival, why did this innocent not see the wonder of heaven as he died?  Michelangelo saw only terror in his victim’s eyes.  Did Lazarus see nothingness as he died the first time?  What does he mean to hold his hand up towards Christ – seeking to return to the here-and-now because there is no heaven; or to warn us all not to believe in Jesus’ words?

Then the painter, Caravaggio, sees Gregorio in a new light.  He becomes Lazarus insisting on partaking in life, in the ordinary world, not even on the outer in the way Caravaggio is as the painter – as the artist.  At the point when Caravaggio knows how to finish the painting of “The Raising of Lazarus”, Gregorio leaves him for real life.  And Caravaggio knows that after death, as Lazarus knows, there is absolutely nothing.

And in writing this play, David Atfield shows the meaning of Caravaggio’s painting as a marker in history of the beginning of disbelief in religion – while we see the raising of religion, a new Lazarus, in our Parliament this very week, with MPs arguing futilely about ‘religious protection’ and ‘religious discrimination’, to allow religious institutions to discriminate against homosexuals.  We heard, as the play was ending on Thursday evening, from a Christian gay woman teacher who has been dismissed by a Christian school just because she is gay.  Check out Q&A on ABC TV, November 25, 2021.

Chiaroscuro, a play of the light and the dark, is a work of art; a poem in 70 minutes; a Caravaggio of his time and ours.