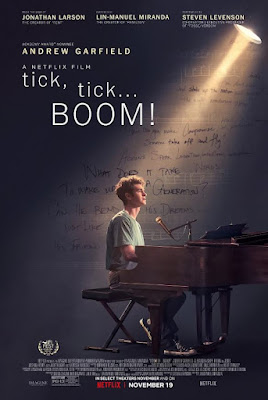 Based on the stage musical by Jonathan Larson

Music and lyrics by Jonathan Larson

Composer, Jonathan Larson, wrote ‘tick, tick…BOOM!’ as a ‘rock monologue’ which he performed in a one man show off-Broadway in the early 1990s.  It told the autobiographical story of an aspiring writer of musicals trying to be successful in the theatre world.  Larson went on to write ‘Rent’, but died suddenly on the day of the first off-Broadway preview of that musical.  The show went on to be a huge success on Broadway and internationally.

Lin-Manuel Miranda, the famous actor and creator of the musical, ‘Hamilton’, has now produced and directed a movie of ‘‘tick, tick…BOOM!’.  It is Manuel’s first direction of a feature length movie.

Starting and ending with, and frequently returning to, a concert performance in a nod to the stage show’s original form, the movie is a straightforward telling of Larson’s struggle for success as a writer of musicals as well as offering an insight into his personal relationships of the time.

Andrew Garfield as Larson gives a winning performance in the leading role.  He captures the drive of this young man desperate to succeed and sings with skill and sincerity.  While this man’s drive affects his personal relationships, Garfield’s powerful and likeable portrayal of Larson keeps us constantly on his side, hoping his dreams will be realized.

Robin de Jesus as his gay buddy, Michael, and Alexandra Shipp as his girlfriend, Susan, give excellent and moving performances.  There is strong support and fine singing by Joshua Henry and Vanessa Hudgens and Bradley Whitford is startlingly good as the living composer, Stephen Sondheim.

The rock music score is tuneful and dramatic and has been very well produced.  As with ‘Rent’, some of the lyrics occasionally jar but overall, it’s an enjoyable musical experience.

One of the songs, ‘Sunday’, is an homage to Larson’s greatest musical influence, Stephen Sondheim, and the scene, set in the diner where Larson worked for many years as a waiter is peppered with cameo appearances of Broadway stars including Brian Stokes Mitchell, Chita Rivera, Bebe Neuwirth, Phillipa Soo and many others.  Broadway fans will enjoy playing ‘spot the stars’.

Lin-Manuel Miranda has done fine work bringing this show to the screen.  His direction is constantly assured with many exceptional moments.  A swimming pool sequence involving some digital magic works very well.  He handles the emotional scenes between the characters with realism and depth.

While this type of story could easily become clichéd, Miranda knows this theatre world and its people and ensures that it stays real throughout.  For those who love theatre, this is a movie not to be missed.

Posted by Canberra Critics Circle at 10:06 AM