A prophetic warning pervades Julian Hobba’s adaptation of Herman Melville’s 19th. century fable of a solitary scrivener, subsumed by social isolation and obsession. This is not to say that Aspen Island Theatre Company’s production of a twenty-first century take on Melville’s Bartleby is without ironic humour, stinging in its sharply pointed condemnation of a society obsessed with bureaucracy’s driving expectations. Hobba’s Bartleby introduces his audience to the three aspects of the workplace psyche. Max Cullen is the Old Lawyer, weatherworn by a long career in the law, yet clinging to the noble and humanitarian ideals of a bygone era. As his junior partner, Dene Kermond is a volcanic explosion of ambition and stress, driven by the obsessive lust for success. Ben Crowley’s Bartleby is a mystery, a self-driven workhorse whose cogs grind to their inevitable standstill. We gaze in apprehension at Bartleby’s descent, or is it ascent, into defiant resistance. His monotone “I would prefer not” intones the dogged protest of the silent will of the underdog. Melville’s release for his Bartleby is death. In Hobba’s work, Bartleby is last seen fasting in a hospital. We remain in the dark as to the true nature of his condition. Does he suffer a nervous breakdown? Does he have Aspergers or is his doodling the result of autism. We do not know, but what Melville, Hobba and Crowley all reveal is a man who has slipped through the safety net of a society more concerned with human achievement than the human condition. In this respect, Hobba’s production is both disturbing and thought –provoking.


Hobba reinforces Melville’s dark warning to the obsessed with reference to the author’s masterpiece. The Old Lawyer grips his copy of Moby Dick, his abiding comfort in Life’s stormy tempest. In his sleep he finds himself cast upon the swirling sea as Captain Ahab, tied to the mast and longing for that soul of peace and joy that the white whale’s death would bring. It is the Old Lawyer who reminds us of the virtue of empathy, a gesture of care and responsibility that is lost on the Young Lawyer, caught up in a bureaucracy of Risk Management, Incident Reports, deadlines, goals and the paraphernalia of modern technology. His fanatical quest for success and its rewards will inevitably erode the values that distinguish the human being from the machine.


In the intimate setting of Street Two and as a part of The Street’s innovative Hive Programme, , Bartleby strikes a relevant and familiar chord.  One would be hard put to find a finer production team in Canberra to do Melville’s morality tale greater justice. Cullen is masterful as the Old Lawyer, steeped in the ethics of the past, gracing the wisdom of his years and battling the frustrations of his age. Kermond plays the Young Lawyer as a warning in frantic motion. His future offers scant hope for a world of harmony and care.


Directing one’s own written work can confront the perils of inexperience, but Hobba is ably supported by dramaturg, Peter Matheson, a trio of fine actors, Christiane Nowak’s simple but functional design, Gillian Schwab’s lighting and Kimmo Vennonen’s excellent sound design and jazz soundtrack, soothing in its mellow sound but also unsettling in its unpredictability. Schwab and Vennonen revel in their skills with the powerfully dramatic nightmare sequence upon the deck of Ahab’s Pequod.


Hobba and the Hive Programme at The Street have done Canberra audiences a favour by bringing Melville’s short story to an audience at a time when more and more people face the dehumanising effects of unemployment or social alienation or where those in work too often are suffocated by the demands of a burgeoning bureaucracy. This production again raises the question of society’s responsibility to care for its citizens. Bartleby is theatre at its best. Confronting, challenging, thought-provolking and reminding us that the theatre is the place for society’s most important questions, and hopefully some answers along the way. This satisfying and absorbing production should not be missed. 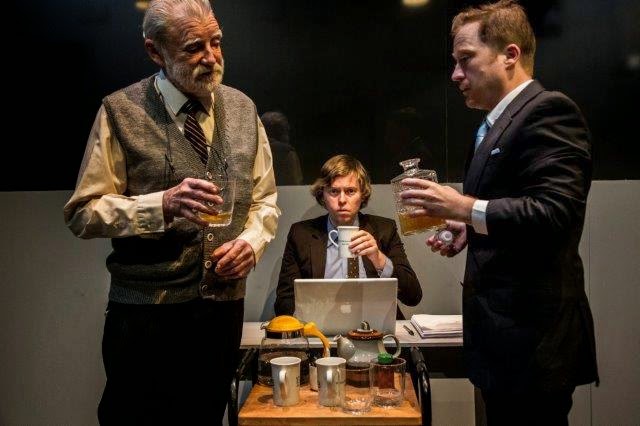