Presented by The Canberra Philharmonic Society 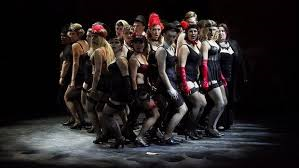 
Kander and Ebb’s searing view of the rise of Nazism as seen through the prism of the lives of the habitués of a seedy Berlin cabaret venue loses none of its unsettling power in this brilliant new production by the Canberra Philharmonic Society.


Confidently and imaginatively guided by director, Jim McMullen, who also conducts the excellent orchestra, and co-designed the impressive set, the well-focussed scenes flow seamlessly between the stage of the Kit Kat Klub and the bedrooms of Frauline Schneider’s run-down guest house to tell two concurrent stories of love under oppression.


Kelly Roberts, all steely fragility and wilfulness as the young English singer, Sally Bowles, hopelessly entangled in the decadence of the Kit Kat Klub,  who captivates the sexually-ambivalent young American writer, Cliff Bradshaw, charmingly portrayed by Mat Chardon O’Dea, who, together with Ros Engledow and Ian Croker, both superb as the guest-house proprietor, Frauline Schneider and her Jewish suitor, Herr Schultz, anchor the show with strong ,well-judged performances which provide touches of warmth in an otherwise un-forgiving milieu.


Angel Dolejsi is mesmerising as the edgy, reptilian Emcee, commenting on events, singing and dancing up a storm with the brilliantly choreographed and costumed Kit Kat girls.

An edited version of this review published in the digital edition of CITY NEWS on 11.07.14