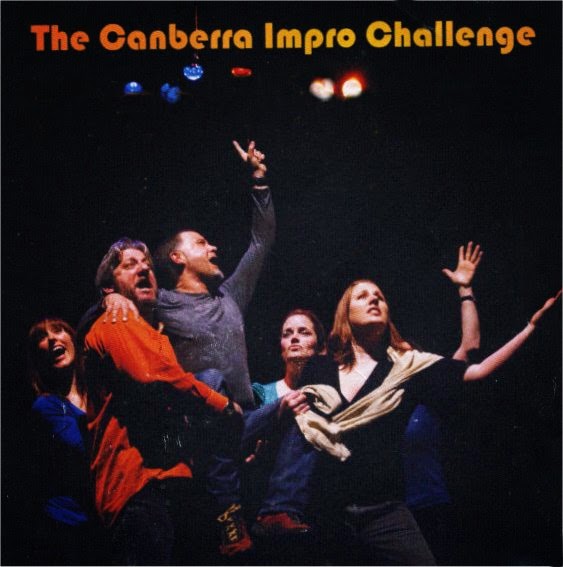 When was the last time you laughed so much that it hurt?  That was my experience on Wednesday evening when I went along to the first challenge heat of Improvention 2014’s, Canberra Impro Challenge.

Improvention is a festival dedicated to the art of Improvisation and Impro ACT is Canberra’s Improvised Theatre company which was formed in 2005 by current Artistic Directors: Nick Byrne and PJ Williams.  Impro ACT teaches and performs all types of improvised theatre, such as that seen on TV’s ‘Whose Line is it Anyway?’.  The Canberra Impro Challenge is in its tenth year in 2014.

The evening presented two heats of ten performers each competing for the chance to go through to the final challenge of the heats winners being held on Sunday evening.  Performers, individually or in varying sized groups generally up to about 4, are called to the acting area and then given themes or situations they must act out completely unscripted.  The quality of performance of each item is then scored by the intensity of applause by audience members.  In addition, as the heat progresses, two judges eliminate performers on the basis of skills displayed.  This method of judgement ultimately produces an individual heat winner.

The inventiveness, spontaneity and courage of these performers is remarkable.  The theme ‘historical replay’ required performers to perform a domestic scene first normally and then repeat it as if they were in Ancient Rome, then in the Elizabethan Era and finally in the American Dust Bowl of the 1930s.  A lecture theme on ‘How Continents Were Made’ produced an eccentric professor stating that, ‘Barcelona was, of course, the old Yiddish word for the centre of the earth’.  A particularly terrifying challenge required performers to create and perform a play forwards and then backwards using the line ‘Hooray, a horse!’  My particular favourite required performers to produce a play with no laughs at all on the theme, ‘Feather bed factory’.  The first line offered in a very serious tone by one of the performers was ‘Here they are, the new geese…’  Of course, it got the biggest laugh of the night!

Being involved in improvisation theatre offers training in many skills and not just for actors.  You learn to think on your feet, develop strong communication and team skills and be more creative and fearless - all skills which are transferable to everyday life and work.  Impro ACT offers improvisation training courses which are well worth considering.

Even under the pressure of competition, you could see that the performers were having great fun on Wednesday night.  The audience quickly joined in with the relaxed and crazy spirit of the evening.  There were serious skills on display here by the talented performers and it was also hilariously funny.
Originally broadcast on Artsound FM 92.7 ‘Dress Circle’ showbiz program with Bill Stephens on Sunday 20 July 2014 from 5pm.