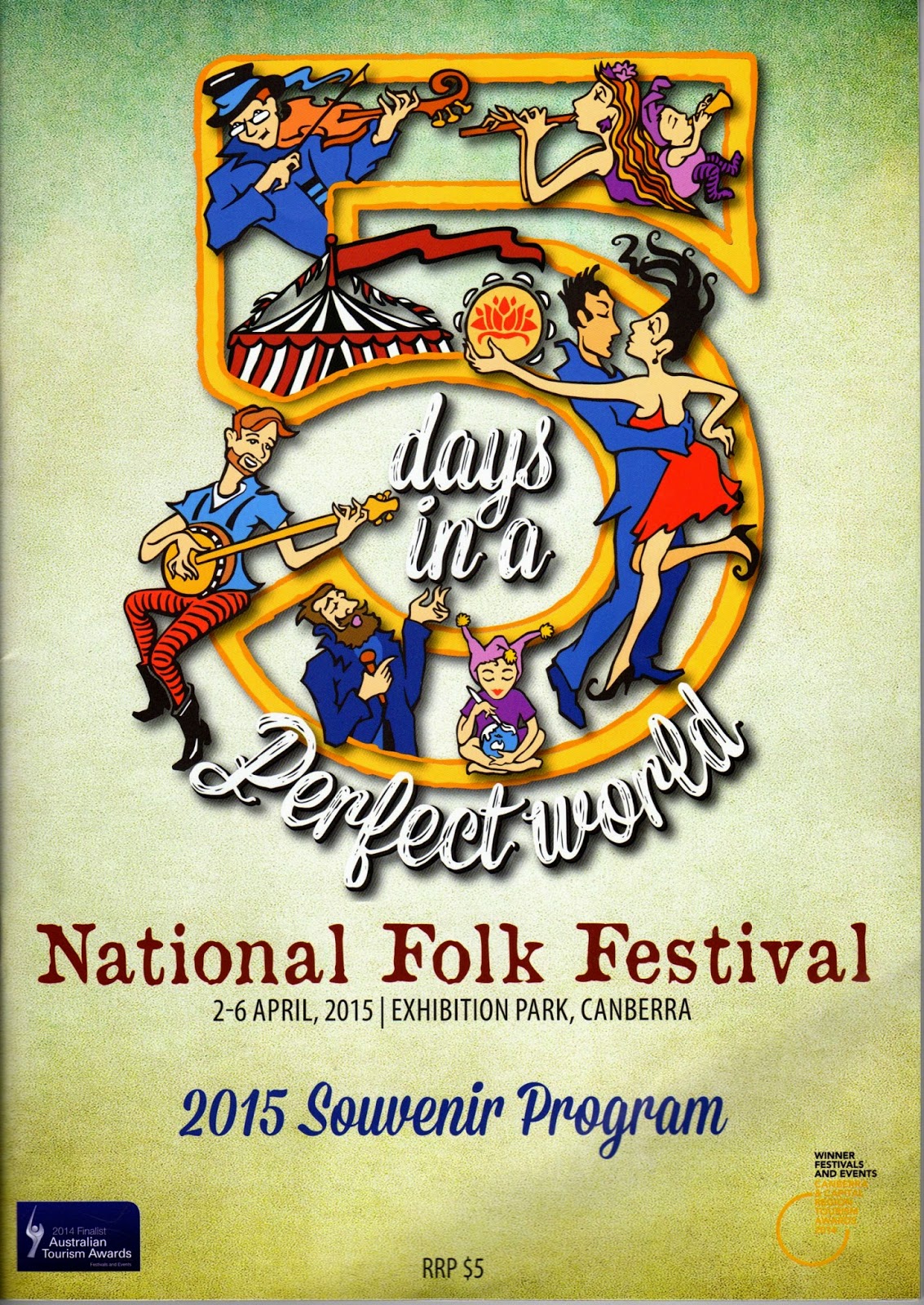 A little reflection by Frank McKone

The National Folk Festival is so vast, with by my count 112 performers listed in the main program as well as a myriad of others in 26 venues and in the streets, that to review them all would be impossible.  I went only on Sunday, despite admonitions from aficionado friends who start on Thursday night and finish late on Monday night.  Every year!

The atmosphere seemed very relaxed (even when a brief storm intruded), the venues were packed, with queues for most performances, and the energy level was buzzing everywhere this year as it always has every year I’ve been.  I would like to mention three shows which I thought were outstanding – all with a Canberra origin.

The Griffyn Ensemble’s WWI – The Antipodes, using music, songs, speeches, documentary records from the period is a work of serious re-interpretation of World War I, compared with the focus on the commemoration of heroes which is central to much of our 100-year anniversary presentations.  The relationship between the role of the Rugby League clubs (from the introduction of League to Australia in 1907-8 which was news to me), the Trade Unions, Billy Hughes, and popular attitudes towards – and I must say, against – the war, made fascinating history.  The attempts to impose conscription, and the failure of those attempts, shed for me a new light on that war.

On the day, modern technology failed to show the video to accompany the performance.  In any case for the Festival the show was edited down, but the complete two hour show will be performed at the Belconnen Arts Centre on Anzac Day and the next day (that is, Saturday 25th and Sunday 26th) at 5pm.  Miss the two-up, but don’t miss this.

Then there’s Fred – Fred Smith, that is.  Canberran to the boot-straps.  A DFAT warrior with a successful diplomatic record in some of the war-torn and socially messy parts of the world, who writes ascerbic songs about life.  The wit is clever and telling, but for me the music was inspiring.  There’s a folk base with a subtlety of tone and mood which adds intellect to the emotional quality.  Now I must follow up his work on CD, Dust of Uruzgan.  Google him as ‘fred smith folk singer’ since there are rather a lot of other Fred Smiths – or if you prefer you can google ‘Iain Campbell Smith diplomat’.

For Mikelangelo and the Black Sea Gentlemen I have to admit a very likely bias, since Michael Simic was a student in my drama classes in his Years 11 and 12 at Hawker College.  So I quote a friend – also a retired (science) teacher but who knew nothing about Mikelangelo: ‘Just brilliant’ was his unsolicited judgement as the crowd went wild.

I last saw the Black Sea Gentlemen at The Street Theatre in 2011 adding to the celebration of the life of David Branson, an original member of the group before his untimely death.  At that time the performance seemed a bit subdued without the originality of today’s show.  When I think back, maybe that was an occasion for being subdued, but I can imagine David Branson cheering them on today.  Every song was a drama – comic, but on the dark side of life – and the absolutely full to the brim Majestic responded to every twist and turn of words, music and action on stage.  Actually quite a lot was off-stage.  The show began as the performers carried in the double-bass as if it were a coffin; it ended with the audience seeming almost ready to carry off the performers as they played their way out through the auditorium.

So I just thought I should reflect a little on the excellent quality of these Canberra-based performers.  Are there still some Canberra bashers who think we have no heart?  Surely not after these three shows.