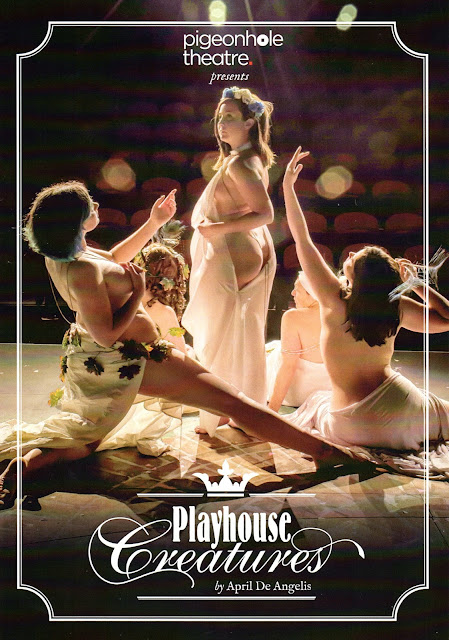 Praise all round for right choice of play, neat set design, very good directing and acting, nice lighting, and interesting musical accompaniment.  An excellent beginning for the newly-formed Pigeonhole Theatre “dedicated to providing professional productions with great roles for women on and off the stage”.

Though it was written more than 20 years ago, de Angelis’ story of some of the first women to be allowed to perform on stage – after the re-establishment of the monarchy in England when Charles II returned from exile in France – and  how Nell Gwynn famously became the king’s mistress, makes the play a relevant and in some ways a cautionary tale for modern feminists.

The case for women’s right to live entirely as the equals of men (which in Mrs Betterton’s case, historically, included her taking over her husband’s role as manager of The Duke’s Company after he died) is plainly and powerfully made. [eprints.uwe.ac.uk/15430/1/April_de_Angelis,_new.doc]

But the insulting and degrading treatment by the Duke of Oxford’s men of direct no-nonsense women like Mrs Marshall, and the women’s need to compromise – for example, by attempting to abort Mrs Farley’s pregnancy so that she could keep her job as an actor (and the fact that when this failed, Mrs Farley had to abandon the child and become a prostitute to earn a ‘living’) is a warning for us that issues of violence against women and of discrimination are still with us today despite nearly four centuries of ‘progress’ and developing ‘freedoms’.

Even in modern, erudite, literate and politically aware Canberra / Queanbeyan.

Though this aspect of the story is uncompromising, even apparently unpromising as enjoyable theatre, Jordan Best and her team of actors and designers present us with the positive side – that is, the commitment and enjoyment of being actors and theatre makers.  This is the connection between those five women from the 1660s and all of us involved in theatre today.  Doing theatre is about having fun, however serious the theme of the story may be.  It’s about close, intuitive communication on and off stage.  It’s about a special kind of freedom in your relationship with – to and from – your audience.  You have power as an actor, but you have responsibility to perform with sincerity and integrity.  Then your audience will respond in kind.  This is what Nell Gwynn has to learn – wants to learn:  and Amy Dunham takes us with her through Nell Gwynn’s experience.  Not as an individualist, not as a ‘star’, but as one of a team of equals.

The set shows us, in an open wooden framed structure, both the dressing room below and the stage above – simple, so practical, so evenly flowing from scene to scene within the theatre; and with a small low podium to one side on stage left, in a spotlight, for the outside street scenes.  Opposite is the solo musician, playing cello, as if in the street but not as a busker:  she is a soloist in an invisible orchestra, carefully balanced in the mixing with recorded sound.

The costumes take advantage of all the flamboyance of the Restoration period, in such contrast to the long decade of Puritanism after the beheading of the king, Charles I, in 1649.

Though not a ‘rich’ production, and so perhaps not seeming as ‘professional’ as a large mainstage company may present, Pigeonhole Theatre’s Playhouse Creatures has the sense of direction, the sincerity of purpose and the integrity essential to good theatre.  That’s professional enough for me.