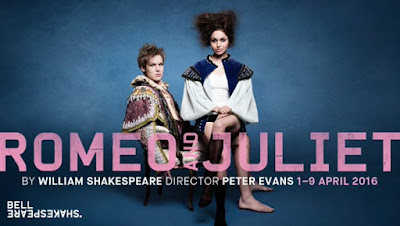 One of Shakespeare’s earlier plays, ‘Romeo And Juliet’ continues to be one of his most popular.  It’s an accessible play with characters and situations that audiences down through the ages have been able to easily identify with.

Bell Shakespeare’s production, directed by Peter Evans, retains the Elizabethan style costuming but adds modern design to give the play a freshness and vitality.  The set design of elements of a traditional theatre surrounded by modern scaffolding reminds us constantly that we are watching theatre both old and new in style.  The actors play with the same old-new sensibility and it all works wonderfully well.

Performances by the cast are uniformly excellent.  As Romeo, Alex Williams is youthful, handsome and nicely captures the wonder of a young man swept up by first love.  Kelly Paterniti is a fabulous Juliet, modern, smart, mature for her years and yet retaining the last hints of the child she was.  Even though we know the story, the committed performances of these actors make the tragedy that befalls this couple intensely moving.

Damien Strouthos gives a great performance as Mercutio.  The comedy is there in his performance but underneath that are glimpses of an intelligent young man using humour to cover some personal demons.  Michelle Doake played the Nurse with a bustling wit that was very entertaining.  The reactions of the household members who’ve obviously seen her hysterical behaviour many times before was a clever touch.

Justin Stewart Cotta shines as Lord Capulet in the scene where he angrily rejects his daughter.  Tom Stokes gives a passionate performance as Tybalt and Hazem Shammas is memorable as the Friar, showing a very real horror at the events he has set in motion with good intentions going horribly wrong.  There were excellent performances, too, from Jacob Warner as Benvolio, Angie Milliken as Lady Capulet, Michael Gupta as Paris and Cramer Cain as Lord Montague.

The atmospheric set and period costume design by Anna Cordingley is very well done and is complemented by excellent lighting by Benjamin Cisterne and the music and sound design of Kelly Ryall.  Nigel Poulton staged the ferociously realistic sword fights.

Peter Evans has given us a memorable production of this great play and the style and clarity of the production would make it very accessible for less seasoned theatregoers, too.  If you’ve never seen ‘Romeo And Juliet’ on stage before, this is the one to see!

Len Power’s reviews can also be heard on Artsound FM 92.7 ‘Artcetera’ program on Saturdays from 9am.
Posted by Canberra Critics Circle at 10:52 AM