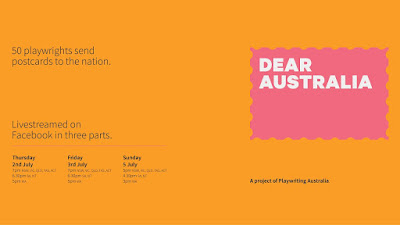 In ‘Dear Australia In Conversation’, 50 Australian playwrights tell stories of where our nation is and where it might go, at a time when a pandemic has forced reflection and change.

Playwriting Australia invited 25 theatre organisations from across Australia to each nominate two playwrights.  These 50 playwrights were then commissioned to each write a short monologue, a postcard to ‘Dear Australia’, which were then filmed by 50 actors, many in their own homes.  The result is a celebration of the diversity of voices in this nation.  Total running time is over three hours but the presentation is divided into three easily watchable parts.

There is some really compelling work on show here.  Both writing and performances vary in quality but the best of them are quite electrifying and thought-provoking.  The quality of the visuals and sound is consistently very good.  Most of the actors give fully developed performances of great depth.  Just a few read their roles direct from the script and are less effective as a result.  Some of these stories are powerful enough to unsettle you and make you question your own beliefs.

Particularly impressive were some of the stories about issues arising during the pandemic lockdown.  ‘Woman At the Bottl-O’, number 27, written by Catherine McKinnon and performed by Jane Phegan, entertainingly pointed out the lack of practicality of some of the limitation rules instituted to stop panic buying.  Mental illness was frighteningly on display in ‘Slow Doom’, number 6, in which a woman appears fine on the surface but is spending her days making hundreds of the same origami figure.  It was written by Morgan Rose and performed very well by Emily Goddard.

Racial issues during the pandemic were raised strongly in ‘Delivery’, number 26, written by Tashim Hossein, in which a foreign student played by Arka Das, tells of the pitfalls of working as a restaurant home deliverer.  The importance of human touch and the lack of it during the lockdown was brought home strongly in ‘Flesh’, number 41, written by Lucy Combe with an effectively understated performance by Kate O’Reilly.

Hiding from reality in the early stages of the pandemic is addressed alarmingly in ‘Limbo’, number 21, written by Stephen Carleton.  Belinda Giblin gives an especially strong performance as a woman on a cruise ship unable to realize the danger she is in.

These stories create a fascinating picture of the extraordinary times we are currently finding ourselves in.  You will want to see them all.  They can still be viewed on YouTube.  They have also been published by Australian Plays.