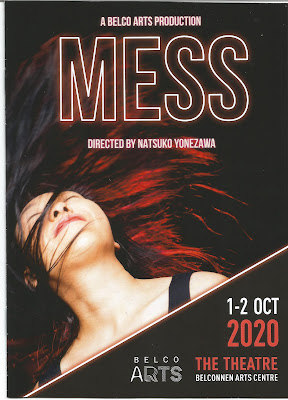 A production called “Mess” almost beggars the response “It was”.  But in this case “It wasn’t”. Far from it.

Japanese-born dancer/sculptor, Natsuko Yonezawa, inspired by the Japanese phenomenon, hikikomori, has created a compelling work which will resonate with many enduring the restrictions of Covid-19. Hikikomori has seen more than half a million youths, and another half a million middle-aged adults in Japan, elect to become modern day hermits.

Incorporating elements of Butoh, with its exaggerated facial expressions and slow-motion movements, a haunting, unsettling music score performed live, together with an evocatively lit, sculptural setting of dozens of small white cardboard boxes, Yonezawa has created a hypnotic, constantly-evolving work to provoke and challenge her audience.

She has chosen her collaborators wisely. Christopher Samuel Carroll trained at Ecole Jacques Lecoq, and already the winner of a Fringe World Overall Award for Dance and Physical Theatre. Miriam Slater, is a multi-disciplinary artist who has also trained in Butoh dance. Both have the skills to interpret Yonezawa’s ideas and both exercised these skills with mesmerising affect, as they moved around each other constantly, scrupulously avoiding contact, until finally, gently, discovering the sensation of touch.

Complimenting their efforts throughout, Marlene Claudine Radice, with the assistance of Yonezawa, incorporated electronic sounds with those from cardboard boxes, bells, clarinets and scraping violins to create a kaleidoscope of gentle cacophony which created exactly the right tone and mood to evoke the discordance of the modern world. Designer, Byrd, cleverly evoked this world, utilising dozens of small white boxes and shiny surfaces, which during the course of the performance transformed into skyscrapers, crowds and ultimately, chaos.

Because of the nature of the work, “Mess” will evoke different responses from each member of the audience. No doubt intended by the creator. But none will leave the theatre unaffected by this superbly crafted, elegantly presented production, which deserves to be seen by many more than will have the opportunity during this all too short season.