If there is an upside to the Covid-19 virus, it is the challenge it has provided to theatre-makers to come up with innovative new ways of producing theatre works. Like every other performing arts company, QL2 was forced to abandon its planned programs for 2020, including an overseas tour, and its mainstage season in the Canberra Theatre Centre Playhouse, which involved a major commission from choreographer, Jack Ziesing, on which work had already begun. .

Not to be deterred however, QL2 Dance decided to seek out a new performance space,  experiment with different ways of rehearsing, and offer two major performance projects,  Jack Ziesing’s commissioned work and the annual end-of-year “Chaos” program, as a double- bill entitled “Leap into Chaos”.

QL2 Dance’s annual “Chaos” project focusses on the young and less experienced dancers as the entry point into the Quantum Leap youth dance ensemble. This year, 53 dancers, aged from 8 – 19 years, some making their first stage appearances, participated in a work entitled “Touch”.

The great strength of QL2 dance is that it is more focussed on process, than on execution, and its works are always proudly ensemble. Under the guidance of professional choreographers, the dancers explore set themes, and are encouraged to contribute movement ideas suggested by those themes, which the choreographers are tasked to shape into a coherent performance.

Because their ideas become part of the end result, the dancers take ownership of the work. The fascination for audiences is watching the personalities of the dancers emerge, despite the variations in age and experience, as they perform often quite complex routines.

Taking inspiration from Covid-19 restrictions, “Touch”, explores the effects of the withdrawal of a basic human instinct.  Five choreographers, Ruth Osborne, Steve Gow, Alison Plevey, Olivia Fyfe and Ryan Stone, worked with groups of dancers to create the seven episodes which make up the work. 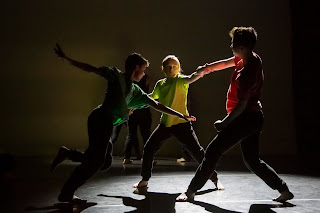 Ryan Stone’s athletic choreography for his two episodes, “Tapestry” and “Find your Mark”, contrasted neatly with Alison Plevey’s whimsical, “Keep in Touch”, and  “The Butterfly Effect”, a gentle section encouraging care for each other, for which Plevey worked with Olivia Fyfe.

Fyfe also created a section entitled “Can We Touch Now” for which she made clever use of face masks, and collaborated with Ruth Osborne and Steve Gow to create the opening section, “New Rule”.

Osborne choreographed the final section, “Closing”, in which she cleverly corralled the 53 dancers into referencing each of the preceding sections, in joyful celebration of communal dance.

All the sections of “Touch” were performed to an evocative electronic soundscape by Adam Ventoura, who also provided the intense, moody soundscape which drove the second work on the program, Jack Ziesing’s , “Sympathetic Monsters”.

“Sympathetic Monsters” commences with a single dancer, in a tight spotlight, slowly performing a series of strange, zombie-like contortions. As the spotlight slowly widened, that dancer was replaced with another, and another, each attempting to outdo the other in pushing their bodies to extremes.

As each dancer was replaced, they retired to the back wall from where they observed their replacement until suddenly the stage erupted into a long, unison segment, performed with admirable precision, involving all the dancers performing to mesmerising effect, movements seemingly extracted from the individual performances.

Taking his inspiration from Shaun Tan’s book, “The Arrival”, Ziesing has created a remarkably mature and challenging work for the QL2 senior dancers, to which they’ve responded with astonishing commitment and finesse.

As is the norm with QL2 presentations, the technical aspects of both presentations was exemplary, particularly Cate Clelland’s muted-toned costumes for “Sympathetic Monsters”, which were both serviceable and appropriate, as was Craig Dear’s imaginative lighting design, and of course Adam Ventoura’s extraordinary sound design.

Because of Covid restriction on audience numbers, all performances of “Leap Into Chaos” are sold out. However, in another innovation for QL2 Dance, this program has been filmed for streaming on 23rd October between 6pm and 9pm. Details on the QL2 Dance website.

This review first published in the digital edition of CITY NEWS on 16.10.2020