THE Canberra arts community has been shocked to learn of the death today (January 21, 2015) of broadcaster, writer, photographer and arts activist Sylvie Stern, after a period of hospitalisation. 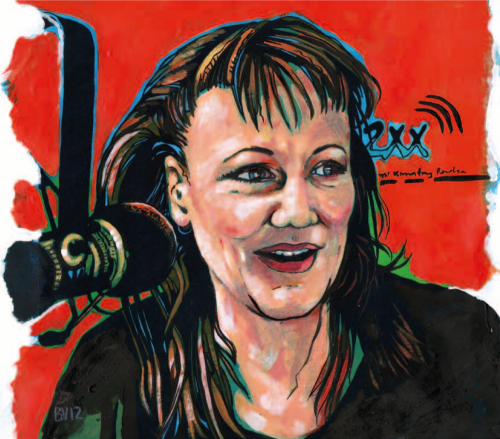 Stern, though never, ever  a 'stern' critic, was one of the leading commentators on the performing  and visual arts in Canberra, so colleagues at 2XXFM and PhotoAccess are planning a celebration of her life in the near future, of which we will publish details when available.
In 2013 Stern was one of the subjects in portrait artist Barbara van der Linden’s Centenary project, “Faces of Canberra.” The portrait is published here with the permission of van der Linden.
I was fortunate enough to interview Stern for the catalogue essay I wrote, and these were my words in 2013, approved by Stern:
There are few Canberra faces likely to be seen as widely around Canberra as Sylvie Stern’s.
A radio presenter for Community radio Station 2XXFM, she has also been a publicist, a singer and promoter of exotic installations in Civic, and the mover and shaker behind cultural institutions like Heaven nightclub, the Kahlo Club, ‘Artbeat’ in the Festival of Contemporary arts, Pulse youth dance events, international women’s day ‘Splash outs’ and Blackartz Day Out, a festival showcasing indigenous musicians and artists staged during reconciliation week 2004.
Born of mixed Spanish-Austrian heritage and the daughter of the distinguished Cambridge linguist Professor George Stern, she studied music at the Sydney Conservatorium of Music and enjoyed a remarkable career as a singer in London and New York, where she lived for 10 years, recording with Donna Summer and working with The Four Tops, Dr John and Bo Diddley.
After suffering a stroke, she moved back from overseas and to Canberra in 1993, where she quickly involved herself in the arts, especially those which bore on social justice and equity. As well, she changed the nightclub scene by bringing in sculptural installations and underground video projections into music events and environments.
On air, Stern is a critic, but an extraordinarily generous one who never, ever belittles artists or resorts to sarcasm. ‘I always try to bring out the artist’s own perspective of the work,’ she says.
‘Whether it’s visual arts, theatre, film or mixed media, I like to find out why they wanted to create it in the first place. What stirred them?’
Stern was part of the ACT Festivals Advisory Funding Committee, and was a member of the ACT Cultural Council for three terms, where she took part in forums on live-music issues facing the local sector.
A fervent advocate for the often-neglected hybrid arts, she has supported professional, emerging and grass roots artists and musicians. She was part of the team that, in 2007, was granted $70,000 for the re-fit of the 2XX FM studios with up-dated equipment.
Known by all as a humane and kind figure, in recent years she has juggled her community and on-air commitments with acting as a full-time sole carer of her late mother.
‘There is a symbiotic relationship between broadcasting and culture,’ she says, speaking for the whole industry. “We try to harbour and create a continuing, creative partnership with writers, performers, musicians and producers across Canberra and the surrounding region, and therefore contribute a shared enterprise with our audience.” To Stern, radio was a labour of love.