INTO THE WOODS - THE MOVIE 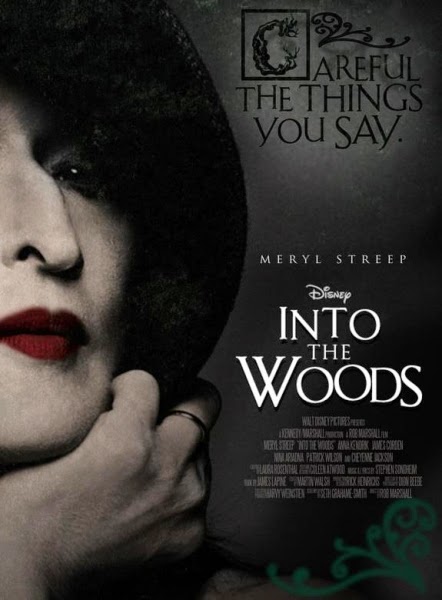 There had been talk for years that there would be a movie of Stephen Sondheim’s Broadway musical, ‘Into The Woods’.  It’s finally here and it’s pretty good, too.

The stage version opened in New York in 1987, winning several Tony Awards despite being up against Andrew Lloyd Webber’s, ‘The Phantom of the Opera’ that year.  It’s a clever musical about a number of fairy tale characters whose stories intertwine.  Halfway through the show, we see them get to live happily ever after as expected but the darker second half shows that they’re not necessarily all that happy after all.  The musical serves up contemporary morals in traditional fairy tale fashion like ‘Children Will Listen’ and ‘No-one Is Alone’.  It’s a musical that children can watch on one level while adults will see and enjoy quite a different show.

Rob Marshall previously directed the successful movie of ‘Chicago’ and the awful flop, ‘Nine’.  He’s done a fine job with this one.  The production design by Dennis Gassner is superb.  The sound on the movie is also notable.  The seats in the theatre where I saw it were shaking when the giant was stomping around onscreen.  There was excellent balance between music and singers, too, which is essential with Sondheim shows where you must be able to hear the lyrics clearly.  I was impressed by the orchestral arrangements, supervised and conducted by Paul Gemignani, a long-time Sondheim collaborator.

Most of the cast do fine work in the movie.  Dominating the show is the Witch, played by Meryl Streep, who has a great time with the clever lines and sings some tongue-twisting songs strongly as well.  Also impressive was James Corden as the Baker, who created a very real and moving character.  Anna Kendrick as Cinderella was sweet and touching and Christine Baranski gave a very funny Ugly Stepmother.  Tracey Ullman was very droll as Jack the Giant Killer’s mother and Johnny Depp scored in the smaller role of the lascivious Wolf who has Red Riding Hood in his sights.  Only Emily Blunt as the Baker’s Wife didn’t work for me.  The original Broadway performer of this role, Joanna Gleason, who won a Tony Award for it, found much more depth and humour in the character.  Next to the Witch, she was the most memorable character onstage.  Her performance and those of the original Broadway cast is preserved on a filmed version of the stage production which is worth hunting down on DVD.

When movies are made of stage musicals, many people are concerned that they’ll be changed too much from the original.  The only major changes I was aware of in the movie were that the Narrator, an onstage character in the theatre is now only a voice over.  In the second half of the stage play, the Narrator also plays a character called ‘Mysterious Man’ who appears to Jack and sings ‘No More’ with him.  In the movie, the mysterious man is clearly the spirit of Jack’s father but the song is not sung and is heard only in the underscoring of the scene.

I recommend the movie, which has apparently been quite a success since its release.  I think the material still works more magically as a stage play and Canberra will see a local production of it for the first time later this year.  If you like the movie, make sure you catch the stage version.