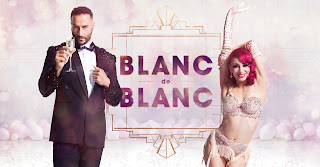 ‘Blanc de Blanc’ at the Spiegeltent advertises itself as ‘a blend of vintage glamour, high end spectacle and titillating acts’.  We expect promoters to talk their shows up to excite and attract an audience and it’s great when a show matches our expectations.

Touring Spiegeltent shows of the past few years have generally provided an evening of off-beat, sophisticated adult entertainment with original and memorable international circus and cabaret acts.  This new production has a few good acts but its emphasis is more on the sleazy side of sex, promising a lot but then not delivering.

The few decent circus acts with excellent lighting were a welcome relief from the padded out, boring banter between acts.  Costumes, makeup and choreography were designed to exude a rampant animal sexuality which has been seen so often before that it now has no impact. 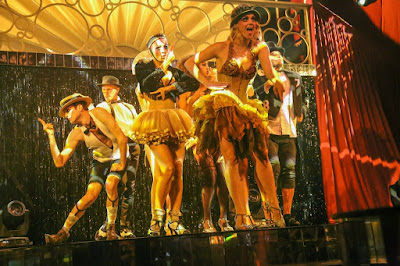 The hula hoop act by Jess Mews was original and very well performed.  The highlight of the second half of the show was a beautiful aerial ballet performed by Hampus Jansson and Milena Straczynski.  The show needed more acts of this class.

This is the first time I have seen a show stopped in the middle of the second act and audience members invited to take selfies with the cast members for five minutes.

Opening night started 25 minutes late.  You have to queue outside until they open the doors so dress warmly and bring an umbrella if it looks like rain.  Premium ticket holders go in first and get the pick of the unreserved seats so you need to queue outside early if you want to be close to the stage.  The amount of leg room in Economy on an aircraft is luxurious compared to what awaits you in the Spiegeltent and with everyone crammed in so tight the sightlines to the stage are poor.

This show will appeal to an audience who is still shockable and prefers their entertainment to be predictable.  If you’re hoping for sophistication, wit and a reasonable number of high quality, unique circus/cabaret acts, this won’t meet your expectations.

Photos by David James McCarthy
Len Power’s reviews are also broadcast on his ‘On Stage’ performing arts radio program on Mondays and Wednesdays from 3.30pm on Artsound FM 92.7.
Posted by Canberra Critics Circle at 12:31 PM