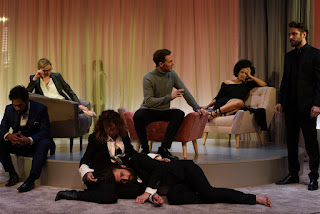 Mark Antony (Johnny Carr) should be the greatest soldier in the world: even his enemies praise his valour, and all he has to do to stop a war is show up.

But Antony is not what he should be, and not just because the soldier is hopelessly devoted to the tempestuous and manipulative Queen Cleopatra (Catherine McClements).

We first meet Antony lounging with Cleopatra: draped in an expensive tailored suit, but shoeless and roughly bearded. This is not a charismatic and stoic Roman, but an executive on furlough smoking a joint. How can he fight Pompey if he can’t even find his shoes?

Director Peter Evans interprets Antony and Cleopatra as a stylish and cosmopolitan celebrity romance: Shakespeare as a Vanity Fair photoshoot.

This is a play of larger-than-life characters, high stakes, and grand language, but the aloofness and stillness of the actors make the power politics clinical. Our brains are activated, but at the cost of our emotions.

There should be a bold contrast between the meeting worlds of Egypt and Rome, but instead the same style is used for each world: one too obsessed with looking cool to even be louche. Octavius (Gareth Reeves) is an inhuman mastermind, but even inhuman masterminds struggle to look impressive in a polo neck.

The liaison between Antony and Cleopatra initially seems as though they are both trying too hard to recapture the glories of past romance, substituting manufactured disagreements for genuine passion.

Catherine McClements as Cleopatra is obviously playing a calculated game, and we wonder at the start whether she feels anything at all for him.

But as the play progresses we see how much they are genuinely obsessed with each other, and this is where we begin to become engaged in their romance: it is when love makes the least sense that it often feels most authentic, and the increasing irrationality of both lovers greatly strengthens the energy and drama of the second act.

Where the play succeeds is in its depiction of women in power. Cleopatra feels like a fashion mogul with a devoted and long-suffering staff who try to weather her wild moods. In an additional complication potent military rival Pompey is here cast as a woman, with Lucy Goleby imagining the character as a dragon of the boardroom. Goleby’s Pompey is masterful and sexual, and her overwhelming force of personality and direct approach provides a strong contrast with the subtle but unpredictable Cleopatra.

The production made great use of scenes where minor characters comment on or steer the action. Ray Chong Nee gave a charismatic performance as loyal Enobarbus, and provided Antony’s one plausible link with the life of his soldiers. Sometimes there was even a sly sense that the tail was wagging the dog.

Bell Shakespeare’s new Antony and Cleopatra is likely to divide audiences. The Harper's Bazaar style taps into a real part of the contemporary world, but rather than making the material accessible to a modern audience instead puts up an additional barrier, dissipating the play’s drama and grandeur into beautiful mist.

As the play shakes off this self-imposed stillness it becomes increasingly engaging, and even finds a sublime madness in the simultaneously tragic and absurd deaths of Antony and Cleopatra: not the fall of great leaders, but of ordinary people trying to recapture a passion they can no longer truly feel.
Posted by Canberra Critics Circle at 10:16 AM