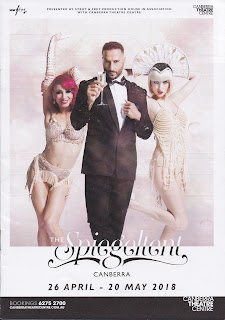 New circus is now old, if not old hat – becoming established as it did in Australia with Circus Oz in 1978.  But perhaps the better comparison for Strut and Fret’s Blanc de Blanc might be the work of the French James Thierée, brought up in Le Cirque Imaginaire and Le Cirque Invisible and reviewed on this blog for his work Bright Abyss presented in the Sydney Festival, 19 January 2006.

Quoting myself, “Thierrée's directing made what might have been a series of circus-style acts into a work of strong dramatic structure which drew the audience into the lives of those on stage and reflected on our own experience - and gave hope that, working together, we may survive the abyss and find our way in some kind of harmony.”

There will be people in the audience last night who will object, saying but we only came for a fun night!  But I reply, in my curmudgeonly way (to steal a favourite word from the famous Canberra Times columnist, Ian Warden), that I wanted more.  The performers – especially Jess Mews whose hoop swinging was certainly the most amazingly complicated and skilful I have ever seen – were all terrific acrobats, dancers, mimes and contortionists, but the basic idea of turning the largest Spiegeltent in Australia into nothing but a bawdy champagne party was a bit limited dramatically, I thought.

Of course, I appreciated what was often a spoof of the up-itself French-Canadian Cirque du Soleil, but what does Blanc de Blanc really mean?

I can’t do better, I suggest, than quote wine merchants Berry Bros. & Rudd:

A classic Blanc de Blancs is restrained and elegant when young, yet with ageing it develops a mouth-coating brioche richness that overlays an intense expression of fruitiness.   Their Champagne by Le Mesnil, Grand Cru is described in this way: Le Mesnil is a cooperative located in one of Côte des Blancs’s greatest villages, Le Mesnil-sur-Oger. It produces Champagnes that are smooth and rich with fine acidity at the basic level; while the vintage wines offer a significant step up, with crisper, richer and fuller fruit that will develop a toasty finesse.

How could you seriously make fun of that, hey? The term Blanc de Blancs designates Champagnes made only from Chardonnay grapes.  If that had been explained in the show, I would have understood.  Surely middle-class Canberrans only ever drink chardonnay – never those awfully pretentious NZ sauvignons.  Though I notice that there’s a backsliding trend recently to the terrible Rhine rieslings, would you believe!

Well, the brioche richness certainly came in a highly original approach to the aerial work, in solo and duet, in and out of the water, but, while the ending inside and outside very surprising balloons and soap bubbles lightened the tone, the crowd taking selfies with the performers was not quite the ‘significant step up’ I would have preferred – certainly not ‘crisper, richer and fuller fruit that will develop a toasty finesse’.

On the other hand, perhaps this is not what the traditional Famous Spiegeltent is about – except that my first experience (of the then much smaller original ‘tent’) was at the Sydney Festival in 2007.  The show was La Clique, compered by Canberra’s very own Mikelangelo, backed live by his Black Sea Gentlemen band.  The episodes followed much the same format as Blanc de Blanc, the nudity of magician Ursula Martinez was much more sexually stimulating, the humour was not based on old-style stereotyping (including isn’t it great to just get drunk), the pure circus skills were nearly as good – and finally, the satire was funnier because it was better written and more biting.

But don’t let this curmudgeon put you off going along for the party, party, party atmosphere.  It was just fun, and after all – maybe – all you need is fun!

All I didn’t need was to stand in a very long queue for a very long time in what was an unusually merely cool evening, instead of Canberra’s usual freezing temperature by this time of year.  I suggest the 6.30 pm hour-long shows should start at 6 pm or even 5.30 pm, since we found ourselves waiting until the previous crowd departed and the venue was set up for the 8 pm show, which actually got under way maybe by about 8.20 pm.  This really wasn’t fun, and helped make the opening of the action a less effective audience warm-up than it could have been.