No-one left the Fitter’s Workshop on Saturday night unmoved after the performance of Max Richter’s Recomposed-The Four Seasons by Vivaldi. Written in Winter 2011, Richter set out to find a new vision for Vivaldi’s original journey through the seasons. In an interview for ABC Classic FM, Richter explained his motivation and his process for writing the work:

When I was a young child I fell in love with Vivaldi's original, but over the years, hearing it principally in shopping centres, advertising jingles, on telephone hold systems and similar places, I stopped being able to hear it as music; it had become an irritant - much to my dismay! So I set out to try to find a new way to engage with this wonderful material, by writing through it anew - similarly to how scribes once illuminated manuscripts - and thus rediscovering it for myself. I deliberately didn't want to give it a modernist imprint but to remain in sympathy and in keeping with Vivaldi's own musical language.

What we heard in the concert at the Fitter’s Workshop was an intensified view of the universal seasonal landscape, in which nature and human emotion are powerfully enmeshed. The opening Spring movement was a joyous cacophony of birdsong, growing in complexity till it filled the ears and imagination. By stripping back Vivaldi’s original score and distilling the absolute musical essence into looped thematic motifs Richter follows in Vivaldi’s footsteps, but he records his observations in a way that shakes the listener out of complacency with new music that moves us deeply.

The Festival Strings did a magnificent job, navigating the tempo variations; never faltering as they recreated Spring birdsong, a Summer storm, a wild Autumn dance party, and shivering crashing Winter icicles, all with the intensity of Richter's demanding minimalist score. Tim Fain grasped the challenging soloist role and led the musical exploration deftly while Roland Peelman kept a steady hand on the harpsichord directing the ensemble with his trademark precision. 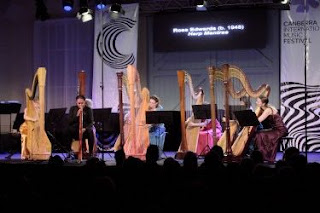 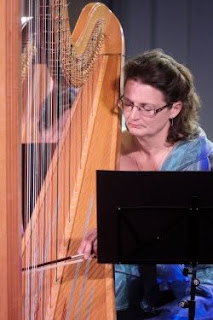 Alice Giles and the Seven Harp Ensemble  - (SHE)

In comparison, the first half of the evening was a gentler more introspective program. The prestigious Seven Harp Ensemble (SHE) led by Alice Giles performed two atmospheric new compositions by Ross Edwards – Harp Mantras and Mary Finsterer’s Four Interludes. While these works exploited the textural possibilities of an ensemble of 7 harps, it was interesting that neither composer capitalized on the potential to empower the voice of each instrument in the consort, displaying the many technical possibilities of these marvelous instruments. Peemoeller’s arrangement of Saint-Saens Danse Macabre, in comparison, demonstrated how each harp could use its voice to create a dramatic whole.

These quibbles aside, the more meditative repertoire played by SHE created an ethereal introduction to the concert, leading us forward for Max Richter’s dazzling re-awakening of the Four Seasons in the second half of the concert - a truly transformative experience.
(Images Courtesy of Peter Hislop) 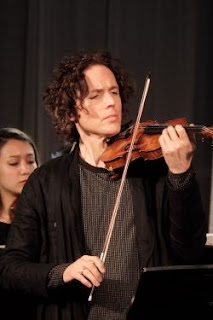 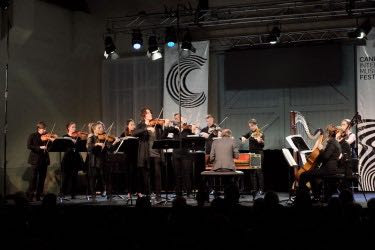