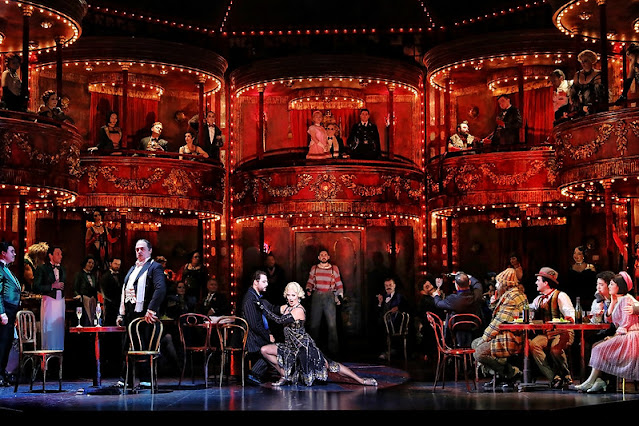 This production of La Boheme was the first opera commissioned by Artistic Director, Lyndon Terracini, when he took over the reins of Opera Australia.  Since its Melbourne premiere in 2011, Gale Edwards concept, set in 1930”s Berlin during the last months of the Weimar Republic,  with its spectacular settings by Brian Thomson, particularly for the Café Momus scene,  Julie Lynch’s lavish costumes and John Rayment’s evocative lighting, quickly became an audience favourite, placing it among Opera Australia’s most oft-performed productions.

However with a new production of the opera announced for 2023, this current season will be the last opportunity for opera lovers, and opera novices alike, to relish the pleasures of this beautiful staging, which has been intelligently reproduced for this season by revival director, Shaun Rennie.

First seen in the 2020 iteration of this production, Valeria Sepe and Kang Wang as the young lovers Mimi and Rodolfo, confirmed the impression created then of being perfect casting in these roles. Both superb singers and actors, they looked lovely together and created a tender chemistry, particularly in the first and final acts, which was thoroughly convincing and very moving.

Similarly, Haotian Qi, in his impressive role debut as Marcello, stamped himself as a singer to watch, revealing a cheeky flair for comedy, but also capable of producing sparks, particularly in the  Act 111 quartet,  when his passionate argument with Musetta, contrasts with Rodolfo’s sad dismissal of Mimi.

Of course the role of Musetta in this production is a scene stealer, particularly her Café Momus entrance in Julie Lynch’s marvellous mirror dress. Favourite Musettas in previous iterations of this production include Taryn Fiebig and Lorina Gore. However, Julie Lea Goodwin can now add her name to that list with her confident, brilliantly accomplished performance, guaranteed to become an indelible memory for everyone lucky enough to experience it.

Andrew Moran provides two delightful cameos as the landlord, Benoit, and Musetta’s  abandoned escort, Alcindoro, and while on indelible performances, what a pleasure it was to have the opportunity to enjoy three of the original cast, revisiting the roles they created in the premiere performances of this production in Shane Lawrencev as flamboyant as ever as Schaunard, Malcolm Ede as the Customs Sergeant , and Benjamin Rasheed as the toy seller, Parpignol.

Once more the Opera Australia orchestra distinguished itself with its lush reading of the score, under the sensitive guidance by Maestro, Lorenzo Passerini, insuring that these farewell performances of this much admired production will remain a cherished memory.