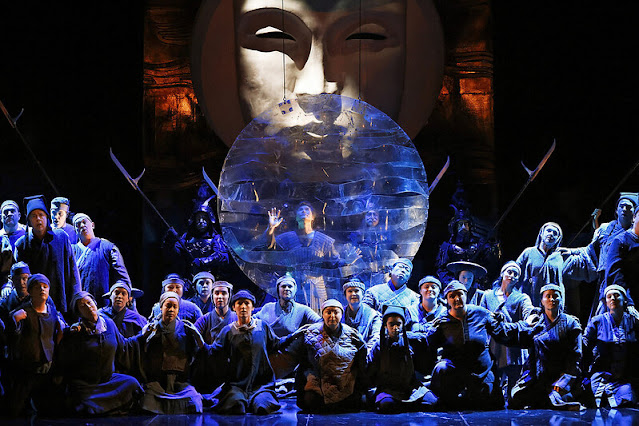 Conducted by Renato Palumbo – Directed and choreographed by Graeme Murphy

It may be more than thirty years old but Graeme Murphy’s mesmerizing staging of Puccini’s last opera, remains a jewel in Opera Australia’s current repertoire. From the very first moments when huge fans open to reveal Murphy’s swirling vision of an ancient China which exists only in his fertile imagination, one is inexorably drawn into a world in which only the ruler’s head can be seen atop his mountain of robes, and where a princess composes riddles to baffle her suitors, who have their heads lopped off by muscular swordsmen when they fail to come up with the right answers.

Murphy’s vision was shared by Kristian Fredrikson who designed imposing settings and lavishly draped costumes which perfectly compliment the choreographed undulating movement of the huge chorus, providing a succession of beautifully composed stage pictures, which frame the action and focus the attention on the principal players, connecting with and subtly enhancing the effect of Puccini’s gloriously melodic music.

First seen in 1990, and now meticulously revived by Shane Placentino, and superbly lit by John Drummond Montgomery, this production makes great use of hand held props such as large fans for the dancers, strips of blood-red silk and hand-held screens to partition areas as the ensemble move around the stage. Even the children’s choir snaking around the stage in tight formation for their folk song, and the clever use of large individual mats held by Ping, Pang and Pong, stylishly interpreted by Luke Gabbedy, Virgilio Marino and Iain Henderson, become striking visual elements.

As the ice princess, Turandot, Lise Lindstrom is an imposing presence, especially when perched high above the ensemble on a tall platform. Her thrilling laser-beam soprano soars effortlessly above the full force of the orchestra and chorus as she poses riddle after riddle to trap Calaf. Later in the opera she sweetens her voice to achieve the near-impossible by making Turandot’s final capitulation to Calaf at the end of the opera, believable, even romantic.

Equally impressive is Yonghoon Lee as Calaf, every inch the Tartar prince determined to win the love of Turandot.  Matinee idol handsome, and possessing a gloriously clear, warmly burnished tenor voice, Lee eschews the usual operatic posturing, to present an assured Calaf who revels in Turandot’s frustration as he offers the correct answers to her riddles, and is unwavering in his resolve to claim his prize no matter what obstacles are placed in his way.  His carefully phrased “Nessun dorma” sung standing amid a sea of undulating silk waves was quite simply breathtaking.

Kara Son breaks hearts with her beautifully sung and acted performance as the tragic slave girl, Liu, who harbors a secret love for Calaf, and is prepared to die rather than betray him. It says much for the effectiveness of Yonghoon Lee’s performance as Calaf that the audience is able to forgive his response to her death.

There is also superb singing and acting among the supporting roles. David Parkin brought both dignity and pathos to the role of Timur, Calaf’s exiled father. As the Emperor Dean Basset, positioned high at the very back of the stage, often sounded under-powered.

Maestro, Renato Palumbo kept impressive control on his huge musical resources, ensuring a glorious sound throughout achieving perfect balance between the orchestra and the huge  chorus while remaining carefully attentive to the needs of his soloists.

This production is a masterpiece and a reminder of how stunning opera can be even without the technical wizardry now available. No surprise therefore that the performance was given  an ecstatic reception from the first night audience.