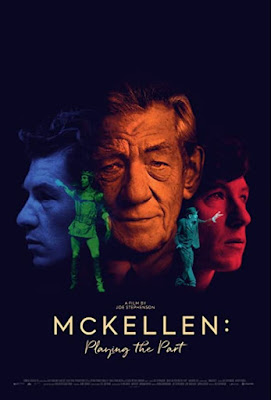 Streaming on ABC IView to 9 February

At the start of the documentary, ‘McKellen: Playing The Part’, actor Sir Ian McKellen advises the unseen interviewer that he is unsure how he should present himself.  With self-mocking humour, he suggests that, even appearing as himself, he is still giving a performance.  It’s just a matter of deciding which performance it should be.

This candour at the start of the documentary continues throughout.  He may feel he is giving a performance but his skill at talking directly and fearlessly to us through the camera is thoroughly engaging.  It’s like we’re having our own intimate chat with him.

Born in Lancashire, England in 1939, he spent his childhood in Wigan.  His experience of living through the war as a young child had a lasting impact on him.  Exposed to theatre from an early age, he became active in theatre himself while at Cambridge University.  It was at that time that he decided to become a professional actor.

After four years in regional repertory theatres, he made his first West End appearance and joined Laurence Olivier’s National Theatre Company at the Old Vic in 1965.  His reputation as a formidable classical actor steadily increased and he was constantly in demand.  Work in films came to him later in life and he found international fame for his portrayal of Gandalf in ‘The Lord Of The Rings’ films.

He has been honoured with most major awards including a Tony Award on Broadway, two Academy Award nominations as well as six British Olivier Awards.

He came out publicly as a gay man in 1988 and has been a tireless activist for gay rights since then.  He was a co-founder of Stonewall, an LGBT rights lobby group in the United Kingdom.  He is also known for his tireless charity work.

The documentary includes a considerable amount of archival footage of his acting performances from television as well as interviews in the media about his LGBT support.  His relaxed eloquence and emotional control during a particularly difficult gay rights discussion with a politician on television is one of the highlights of the archival footage shown.

Another aspect of the documentary adds an unexpected dimension.  Certain scenes have been dramatized and woven into the commentary.  It works extremely well.

This is a fine documentary about a remarkable actor and man.  He may be famous but his down to earth manner makes him engaging company.  He radiates honesty laced with a sense of humour throughout.  I didn’t want it to end.

‘McKellen: Playing the Part’ is available for streaming on ABC IView until the 9th of February.

Posted by Canberra Critics Circle at 7:52 AM