Antoine de Saint-Exupery’s novella about a young Prince who visits various planets including earth, in search of answers to questions about human nature with its themes of loneliness, friendship, love and loss has been a magnet for creatives since it was first published in 1943.

It’s inspired plays, films, ballets, even puppet shows, but this latest lavish interpretation, currently enjoying a return Sydney season in the magnificent new Coliseum Theatre in Rooty Hill, is probably the first to combine circus arts, dance and cutting edge technology in an effort to visualise the abstract concepts inherent in the book.

All the characters are there. The Aviator, the Rose, the Vain Man, the Drunkard, the Businessman, the Lamplighter, the Snake, the Fox, all interpreted by skilled acrobats and immersed in surreal imagery . The Lamplighter swings precariously from a lamppost. Computer numerals constantly hurtle around the Businessman, and the Vain Man performs in a world awash with images of handsome males. Each character has its own environment, and thanks to the spectacular immersive digital designs which flood the huge backscreen and stage, each environment is quite wonderful, enhanced as  they are by Terry Trucks superbly atmospheric soundscapes.

Apart from the Narrator, none of the other characters speak. Instead the Narrator, played by the Associate Director and Librettist, Chris Mouron, wanders through the proceedings, sometimes singing, but usually speaking in charming French accented English, quoting abstractions from the original novel. For those unfamiliar with the novel, very few of these quotes offer any assistance towards understanding the purpose of the various characters.

The performers, all of whom appear to be skilled acrobats, are required to convey their feelings and emotions through a mix of dance, aerial acrobatics and movement.

This creates something of a barrier for the performers however, because while their various apparatus are useful for creating arresting visual effects, they are not particularly useful for expressing emotion, creating an impression that the performer’s physical virtuosity is compromised by the need to perform explanatory choreography. This was particularly noticeable in the performances of Antony Cesar’s Vain Man and Srilata Ray’s Snake, both of whom were obviously dynamic performers bursting for the opportunity to break out of the confinements of their roles. 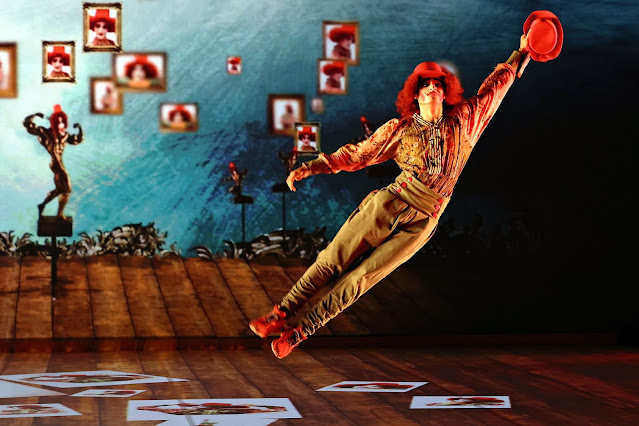 Tournie’s quirky choreography worked best in the ensemble numbers, particularly  the delightful “Draw me a Sheep”, “The Ballet of the Lights”, “The Ballet of the Roses”, but most especially in the charming sequence in which  The Fox (Dylan Barone) pleads with The Little Prince (Lionel Zalachas) to tame him.

It’s been noted that the fantasy of The Little Prince works because the logic of the story is based on the imagination of children rather than the stark realism of adults.

This being so then the children at this performance must have been in raptures, having their imaginations overstimulated by the continuous spectacle offered by this production which is scheduled to move on to Broadway following this short season at The Coliseum.

This Review first published in the digital Edition of CITY NEWS on 10.01. 22.