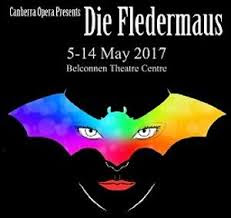 Presented by Canberra Opera
Belconnen Theatre Centre until 14th May.

Building on their previous productions of “La Boheme” (2015) and “Suor Angelica” (2016), the growing confidence of Canberra Opera is nicely reflected in this intelligent and entertaining production. Originally premiered in 1854, “Die Fledermaus” has remained one of the most popular operettas in the repertoire, principally because of its beguiling score by Johann Strauss 11.
Choosing a new English translation by Ian Gledhill, and setting it in the 1950’s , director, Karyn Tisdell has marshalled limited resources to great effect to produce this impressively sung, visually attractive, production, sprinkled with laugh-out-loud moments gently satirising operatic traditions, and some well-staged physical comedy.

Attractively costumed in 1950’s fashions, performing in an imaginative, versatile setting designed by Mel Davies, and accompanied by an admirably crisp on-stage quintet conducted by Lizzy Collier, the production showcases a vocally impressive cast who handle the vocal gymnastics with aplomb while delighting in the silliness of the convoluted plot.

Keren Dalzell gives a stylish performance as Rosalinde von Eisenstein, busily managing to fend off the attentions of her ex-lover Alfred (a very funny, Ken Goodge) while trying to catch out her caddish husband Gabriel von Eisenstein (played with flair and gusto by handsome Andrew Barrow).  Her rendition of the Czardas in the second act was one of several vocal highlights.

Although some over-indulgence in unnecessary interpolations in the third act, particularly the stand-up routine by the likeable Sam Kentish, slowed the pace of the production almost fatally and deprived the champagne atmosphere of some of its sparkle, this “Die Fledermaus” is an impressive accomplishment by Canberra Opera and a welcome opportunity to experience an enduring operatic masterpiece.

This review first published in the digital edition of CITY NEWS on th May 2017
Posted by Canberra Critics Circle at 10:35 PM