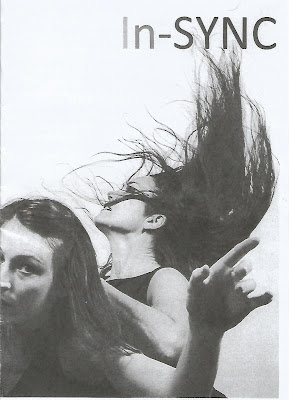 Two of Canberra’s most prolific and original dance-makers, Liz Lea and Alison Plevey, pooled resources to present this fascinating program as a finale to Ausdance ACT Dance Week. The program consisted mainly of individual solos danced by Lea and Plevey together with a preview of a new work choreographed by Jack Ziesing for “This Poisoned Sea”, a QL2 Dance program to be performed in the Playhouse in July.

An extraordinary dancer with a highly developed sense of line and stillness, Liz Lea takes much of her inspiration from science and philosophy. Her first solo, “Two men and a Table” was a remarkable work inspired a conversation between Albert Einstein and Rabindranath Tagore.

Responding to a recording of her own voice detailing the conversation, Lea’s mastery of Indian dance techniques informs the work, not only in her use of sweeping, graceful hand gestures punctuated with moments of stillness, but in her  mobile facial movements where even the slightest  raise of an eyebrow becomes significant. Then just as the viewer begins to wonder if the movements would be so transparent without the words, the words are replaced by a gentle Bach concerto, and the movements transform into an exquisite dance. The effect, enhanced by beautiful lighting design by Karen Norris, was breathtaking.

Although the connection to the movement for another solo, “46864”, the prison number given to Ahmed Kathrada who spent 26 years in prison with Nelson Mandela, was rather less obvious, the work itself, performed in traditional Indian costume, to music by the Sandy Evans Trio and Bobby Singh, proved fascinating.

“Never Going to Be Blue”, inspired by the sequencing of the  first DNA-based genome , was a delightfully tongue-in-cheek work in which Lea drew on her own DNA as a showgirl to create a spectacular solo utilising her considerable burlesque skills manipulating red feather fans and huge billowing red silk skirt. This work ended on a surprising note as the prelude to a film "RED Mark 1" responding to Lea’s own experiences as a victim of Endometriosis.

No less thought-provoking, but completely contrasting in style and execution, were Alison Plevey’s solos, commencing with a remarkable work entitled “Dancing with Drones” which featured Plevey mimicking a projected image of herself being menaced, in various locations,  by a mechanical drone.

Butoh influences were present in her solo “Andani Carmichael”, part of a forthcoming full-length work “Mine!” which she is developing for her company “Australian Dance Party”. Prettily costumed in pink, Plevey’s initially cheerful dance was punctuated by the unsettling sounds of loud explosions. Playful episodes with Lego pieces and a toy truck unexpectedly focussed in a sobering spoken statement about mining and the Great Barrier Reef.

Continuing her focus on social issues, Plevey’s final work “I See” was a cleverly layered comparison of the effects of the drug, Ice, and global warming, as evidenced in the melting of polar icebergs, which again demonstrated Plevey’s extraordinary ability to interpret complex abstract issues in dance terms.

Embellishing an already remarkable program, the QL2 Dance youth dance ensemble presented a preview of its forthcoming work “This Poisoned Sea”. Also evoking icebergs, the excerpt, “A Hellish Thing” was choreographed by Jack Ziesing to original music by Adam Ventura.

Outfitted in striking orange and black costumes the ten young dancers executed Ziesing’s complex, inventive choreography with remarkable assurance and precision, leaving the audience in no doubt of the promise of an extraordinary experience when the full work is revealed in July.