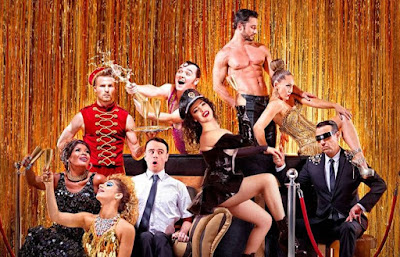 Velvet is a hard show to pin down - from the publicity, you know that it is a disco-themed circus dance party concert featuring Marcia Hines, but somehow it is hard to work out how that will  all translate into a stage show.

Director Craig Ilott describes it as an "amalgam of variety and concert forms," and that is a pretty fair summary, although in practice it has more in common with circus, with balancing and aerial acts decked out in sparkly costumes performing to pounding disco beats.

But the hybrid format works extremely well, achieving a kind of disco-themed synaesthesia, and even with the  post show dance party it felt too short - surely the mark of an excellent night's entertainment.

The show takes inspiration from Studio 54 for its aesthetic and vibe, a culture of "abandon, glamour and freedom", although of course scrubbed clean of any drug use or lust: a welcoming community of beautiful people united by their nimble athleticism and love of disco funk.

The light narrative thread had Tom Oliver as a recognisably Mormon-attired young man who stumbles into Studio 54, discovering both his homosexuality and a more fabulous wardrobe.  Tom's strong singing voice captures the disco spirit perfectly, although his highlight was a very striking acoustic cover of Staying Alive.

The star attraction of the show is of course Marcia Hines, and her tremendous experience and passion for her art came through in an excellent performance of classic disco tracks.  People who came to the show exclusively to see her were definitely rewarded with a top notch performance.

Of the circus acts, the clear favourite was the doughy Craig Reid (also known as "The Incredible Hula Boy"), who with fey mannerisms demonstrated complete mastery of the hula hoop, whether swinging one on each limb or being lifted into the sky to spin hoops with his entire body.  The extraordinarily buff Mirko Kockenberger did a bellhop-flavoured balance routine, drawing cheers from his ability to take off his pants while doing a handstand, and then more impressively showing us that while balancing precariously he could also put them back on.

And even when the cast took their final bow the fun was not over, with visor-sporting drummer Joe Accaria encouraging the audience to get up and dance.  Seeing a Canberra audience in the Playhouse all get up and jive was rewarding for those who after listening to the disco Greatest Hits compilation were more than ready to get up and dance.  Cleverly the theatre provided a DJ for the post-show function so the dance party then continued well past the conclusion of the show.

Velvet is a hard show to sum up, although "disco circus concert" comes close.  Marcia Hines is stunning and Tom Oliver is growing into a fearless performer, and both the music and physical feats were extremely entertaining.  Velvet, like Studio 54 itself, crosses genres to celebrate freedom, and generously invites the audience to join the dance party.