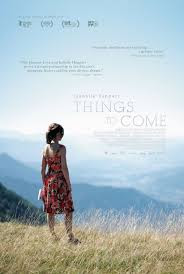 The future? Impossible to predict, we know that at least. There’s no way to escape it. And now something they call disruption is taking place at every level. Plus ça change, plus c’est la même chose? No way. It’s the more things change, they don’t remain the same.

What’s to be done? Whatever the answers are, French writer-director Mia Hansen-Løve shows that she is an old and wise head on young shoulders, unusually good at exploring the complexities and nuances of intimate relationships. Her second feature film, Father of My Children, told of a family tragedy in a bracing and unsentimental style and it still packed a wallop. Incisiveness is a distinctive trait of this filmmaker, and in Things to Come it is enhanced by the powerful presence of Isabelle Huppert.

Huppert has been indomitable lately, maybe for as long as we can remember. Her character in Paul Verhoeven’s Elle was a no-nonsense businesswoman who determined that a violent rape by a stalker would not knock her off course.  In White Material, in which her character represented some of the last vestiges of French colonialism in Africa, she gave director Claire Denis her complex, understated best. Here in Things to Come, Nathalie (Huppert) is facing the future at a difficult time. After suddenly discovering that her husband, a fellow philosopher, is leaving her, she carries on as usual, dealing with the decline of her demented mother and the demands of her job as a high school teacher.

As in Elle, the response of Huppert’s character is brisk and decisive. The sound mix ensures that we don’t miss Nathalie’s brisk, clipped walk in her apartment as she consigns her husband’s conciliatory bouquet of flowers to the bin or prepares Christmas dinner for her remaining family. The sound of Nathalie’s heels hitting the floor is an intentional, or unintentional, motif which is, somehow, amusing. Hansen-Løve and Huppert work perfectly in sync.

Nathalie once participated in the massive student demos of ’68 and was for three years a communist, like most of the French intellectuals at the time. But where does she stand now? Inter-generational philosophical exchanges in Things to Come give the film scope to comment more broadly on the state of French politics and society. Fascinating, and very much du jour. Both parents of the filmmaker are philosophy professors, and her mother contributed directly to some of the dialogue. 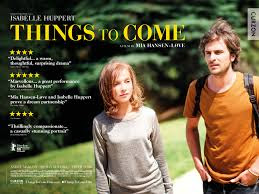 Events develop in surprising and satisfying ways, a tribute to the thoughtful and intelligent writing that underpins it, and the deft and fluid direction. An opportunity develops for Nathalie to explore her friendship with Fabien (Roman Kolinka), a former student of hers. A little frisson of recognition there for French audiences, one supposes? The friendship leads to time spent in a remote corner of the beautiful French countryside, open spaces where anything is possible, but Nathalie’s journey is neither radicalised nor is the outcome quite as we might expect it. Only it’s better.

The trailer may have encouraged us to anticipate a certain kind of film, but Hansen-Løve has presented us with something else. It is a special experience, and there’s no also reason why this voyage of re-discovery to the inner self can’t appeal to everyone who has lived a little.

Posted by Canberra Critics Circle at 11:22 AM