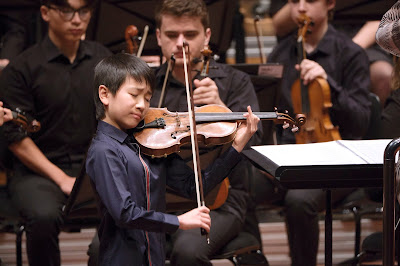 
The final concert of Canberra Youth Orchestra’s 2019 concert series had everything you could ask for at Christmas - four varied and fascinating works, two fine conductors and a performance by an extraordinary young man on violin, Christian Li.

The concert commenced with “Romanian Rhapsody No. 2” by George Enescu.  Regarded by many as Romania’s most important and influential musician, Enescu composed his two Romanian Rhapsodies in 1901.

His second rhapsody is a beautifully melodic work with moments of quiet reflection that contrast with unexpectedly dramatic sections.  A lyrical dance leads to a haunting and delicate finale.  The orchestra under Max McBride started a little uncertainly but quickly gathered strength, giving a pleasing performance overall.

As a suite of three dances this work has had a life beyond the little known opera.  Under Max McBride’s baton, the orchestra played with notable clarity, bringing out all the colour and spectacle of this enjoyable work.

After interval, conductor Rowan Harvey-Martin led the orchestra with “Walk to the Paradise Garden” by Frederick Delius.  Also derived from a now rarely performed opera from 1907, “A Village Romeo and Juliet”, this work was composed as an orchestral interlude to be played between scenes.

In keeping with the opera’s farmland setting and characters, the music has a lyrical, bucolic atmosphere but with unsettling dramatic undercurrents.  It was nicely played by the orchestra.

The final work of the evening was the very well-known “Violin Concerto No. 1 in G Minor”, composed by Max Bruch in 1868.  Violin soloist, Christian Li, joined the orchestra for the performance of this work which was also conducted by Rowan Harvey-Martin.

Christian Li is 12 years old and has won a number of international music prizes already.  He was the youngest ever joint Junior 1st Prize-winner of the Yehudi Menuhin International Violin Competition in Geneva in 2018.

His playing of the Bruch concerto was simply amazing. He not only played with great technical accuracy but achieved a depth of emotion that was unexpected in someone of his age.  The orchestra accompanied him very well, especially in the rousing third and final movement.

Standing ovations have become rather over-used these days but in this case it was highly deserved, not just because of Li’s age but because of the exceptional skill and maturity he displayed with his playing.

Posted by Canberra Critics Circle at 8:27 AM