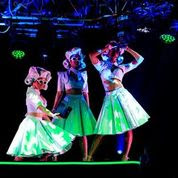 Canberra Theatre , we have lift off. Cirque Stratosphere is something out of this world. The secret of a great circus show is not in its startling acrobatics, its breathtaking aerialist acts, its clowning and audience participation or its phenomenal  feats of strength, agility and endurance.  These are all familiar stock in trade of the circus acts. The secret is in the concept.  And it is in the concept that Cirque Stratosphere proves itself to be beyond the bounds of mere earthiness. A huge elevated hexagon beams out  rays of incandescent light. Above and beyond the iridescent rays of coloured lights a DJ performs her magic. On stage an astronaut appears in the audience, beckons two men forward to beat the drums on cue while the audience is divided into choral parts. In unison the separate choral  parts unite to create a distinguishable rendition of Richard Strauss’s theme composition for Stanley Kubrick’s  Space Odyssey. At the same time and in time with the choruses, the DJ lets forth the stirring and uplifting tones of Thus Spake Zarathustra.  We are transported into a galaxy of imagination and wonderment.


President John F Kennedy’s  1962 exhortation to probe the very outreaches of space and land on the moon, a reality he sadly never lived to see, sets the show upon its journey to July 21st 1969 when Neil Armstrong  took that “small leap for man, a giant leap for Mankind. And it is during that journey, accompanied by the historical account of the stages of the trajectory to the moon that the stunning international company of circus performers exhibit their rare talents. A pole dancing aerialist defies gravity as she spins around the pole with only her feet in contact. Acrobats fly and somersault into the air from the end of a teeterboard. Two dancers on roller skates spin with astounding velocity on a turning plate. A dancer, swept away by the images flashing into her living room for a distant moon pirouettes on her hands upon the turning plate. Such are the images that flash before our eyes, awe inspiring visions of a new world. These are not mere displays of physical skill, but rather acts of courage and invention. An acrobat slip and returns to complete the action.  A trapeze artist grips an attachment on the bar with his mouth and spins with arms and legs outstretches, daring to do what no trapeze artist has done before.

Throughout as the Dj hurls her tracks with musical force into the universe the clowns straddle the space between acts with their comedy routines and audience participation. It is not particularly funny but a staplegun and balloon standoff at the OK Corral fills in the time while all OH and S concerns are carefully stage-managed as the next dangerous act is set up. But these artists are masters and mistresses of their art. Timing is precise as carefully calculated as a mission to the moon in its particular exactitude.


And so the journey comes to its grand finale, not with a full company spinning and twirling, soaring and leaping, but with two remarkable tumblers, who leap through hoops as more are places and the music swells with tension and excitement until, after a slow topple by the hoops, one tumbler indicates once more and with perfect precision, split second timing and sheer determination of spirit and self belief, the acrobat runs, leaps and clears the hoop in a single bound. It is the final testament to the courage, endurance, conviction and faith of the Apollo 11 astronauts who dared to make JFK’s dream come true. 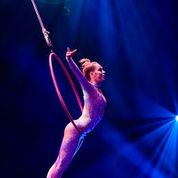 Cirque Stratosphere is a timely reminder that human beings are capable of  the most amazing feats  if only we should dare to journey beyond the ordinary and reach out for the stars.

Posted by Canberra Critics Circle at 10:29 AM