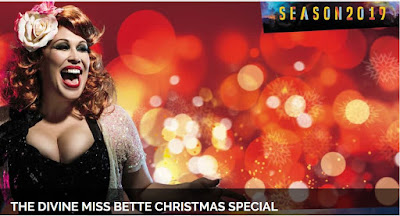 “I insist, that all my jokes be told letter perfect.”  So said Bette Midler, immediately after her joke about her boyfriend Ernie’s ‘woman as sex object’ comments.  “Get off my back!” she told him, to ecstatic cheers from a full house.

That was in Cleveland, Ohio, in 1976, and the joke still worked for Catherine Alcorn in Queanbeyan, New South Wales, in 2019.  Wow!

“Catherine Alcorn’s fabulous homage to Bette Midler, swings back to town for a Christmas Special. Whilst Alcorn has been tottering in Bette’s shoes for a while now, her show has been revamped and is bigger, better and even more impressive as she oozes charm and charisma channelling her idol.

“With lots of Miss Midler’s well known songs and well-presented patter, Catherine Alcorn’s ‘The Divine Miss Bette’ is a must see performance. Her show is guaranteed to warm the coldest of Christmas Nuts and her live band promise to Jingle Your Bells. So polish off your Ornamental Balls folks and make Christmas 2019 one to remember.

Appreciating Alcorn’s representation of Midler becomes a complicated story.  I was never a great fan of Bette Midler as a movie actor, but her show on stage was clearly a different kettle of fish.  In Australian terms, her stage character paralleled actors like Gary McDonald playing Norman Gunston, who conducted completely absurd interviews with famous people, such as Prime Minister Gough Whitlam on the steps of Parliament House at the time of his dismissal by the Governor-General in 1975.

In her show Live at Last, Midler appears to play herself in a madcap but often telling satire of a star performer.  She doesn’t even use a separate name for the role.  The Norman Gunston story is relevant here, because even with a separate name for his character, Gary McDonald found himself in psychological difficulties as Norman became more ‘real’ than Gary.

Now we see Catherine Alcorn “channelling her idol” – apparently playing herself, including relating directly to people in the audience, while actually playing Bette Midler playing a fictional character apparently as herself.

The fascinating thing about Alcorn’s performance, as I saw it, was that she found she needed to work a bit harder than she seemed to expect at the beginning to ‘warm up’ the Queanbeyan audience (who also were clearly mainly idolising Bette Midler).  But she managed even before interval to make us feel as if she had become Midler – even though the Midler she became was a kind of satirical spoof of a performing star.

Her success, as it had been for Midler in Cleveland, was possible because ‘my girls’, Clare Ellen O'Connor and Kirby Burgess, could sing, dance and spoof to match Alcorn’s acting quality.  Midler had “The Staggering Harlettes” and also her band “Betsy and the Blowboys”; Alcorn also had a terrific band, so in tune with her even when she was improvising and responding to audience requests for songs – through two encores, ending (of course, without the need for anyone to ask) with The Rose.  So special applause from me for the women, and for Michael Tyack, Geoff Green, Tommy Novak and Crick Boue.

Is Catherine Alcorn “bigger, better and even more impressive as she oozes charm and charisma channelling her idol”?  I can’t judge since I haven’t seen her other versions of The Divine Miss Bette, but the Christmas Special certainly went down very well on Thursday – and I expect even better with the meal and champagne on Saturday night.

Yet as the advertising shows, Alcorn is not quite the real Midler.  This show certainly catches much of the raunchiness which made Midler a new woman on stage in the 70s, but Alcorn is closer to our more modern stand-up comedy performer – but without the harder edge of almost cynicism that Midler revealed in her satirical characterisation.

But, after all, it is Christmas – so enjoy.

Go to https://www.youtube.com/watch?v=uCcJoiEBw-w for the Bette Midler show Live at Last.