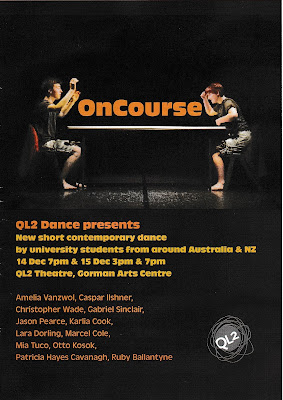 
QL2 Dance’s ‘On Course’ project is a great opportunity to observe young dance artists in development.  It’s now in its 13th year.  QL2 dancers as well as other students who are currently in full time study at universities around Australia and New Zealand come together to choreograph, collaborate and perform new short works.  Ten items were presented on opening night.

The evening commenced with two filmed works.  ‘Kafka’, directed by Jason Pearce was based on a scene from Murakami’s novel ‘Kafka on the Shore’.  A study in muscularity, it was cleverly filmed and edited.  At times the angular, organic nature of the work was reminiscent of the art of H.R. Giger.  The original music score by Theo Vanclay added an atmospheric dimension to the film.

The second film was ‘Hyperfocus’ by Gabriel Sinclair.  In this film, the choreography of the dancing merged nicely with the imaginative choreography of the film editing, producing a strong work that was not merely a filmed dance.  The atmospheric music score by Loulou Wheeler and the cello playing by Darcy Gilkerson complemented the images on screen. 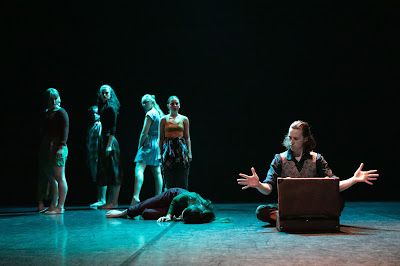 The eight other works presented live were all notable for their imaginative concepts and all were well-produced and strongly danced.  All had great lighting designs and sound.  Issues raised in the dances ranged from explorations of the human condition to statements about nature, the arts and world issues.  The dances with clearly understandable concepts that an audience member could connect with were the most successful.

Ruby Ballantyne’s ‘My Roommate is a Very Heavy Sleeper’ was a perceptive and amusing work that looked at conscious and unconscious states and the issues of care and relationships.  It was danced very well by Ballantyne with Maddy Bowman. 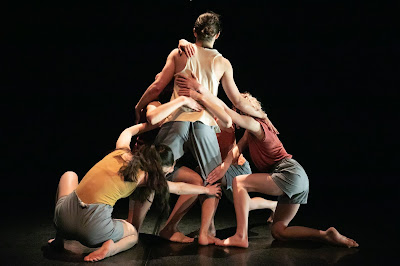 ‘Just Breath’ by Lara Dorling was a dramatic work that focussed on our inner ‘chi’ or breath energy.  She created a dance that was highly expressive and demanding for the dancers and it worked very well.  The four dancers, Caspar Ilsher, Pippi Keogh, Karlia Cook and Lara Dorling herself performed it with great assurance.

Marcel Cole choreographed and performed ‘Free as a Bird’, a work of great depth about a dancer with doubts about their direction in life.  While it focussed on the life of a dancer, the doubts presented are universal and something that can challenge us all at various times of our life.  A showcase for Cole’s strong dance skills, this work clearly resonated strongly with the audience.

‘Eye to Eye’, choreographed by Caspar Ilsher, looked at persuasion and the moral issues that can arise.  It was a nicely developed, clear concept with eight dancers and a music score composed by Ilsher himself.  The choreography was dramatic with fine group and individual moments of dance.  The ending was especially satisfying and effectively performed.

A great opportunity to see the emerging work of all of these fine young choreographers, this was a memorable evening of dance.

Photos by Andrew Sikorski, Art Atelier
Len Power’s reviews are also broadcast on the Artsound FM 92.7 ‘In the Foyer’ program on Mondays and Wednesdays at 3.30pm.
Posted by Canberra Critics Circle at 6:25 AM