BLINKY BILL IS ON THE LOOSE AGAIN ADELAIDE FRINGE 2021 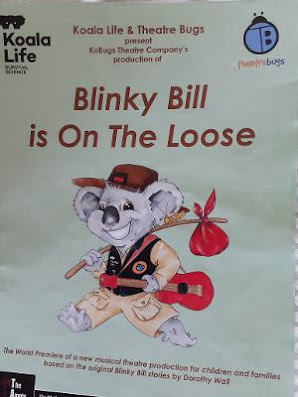 Blinky Bill is on the Loose. 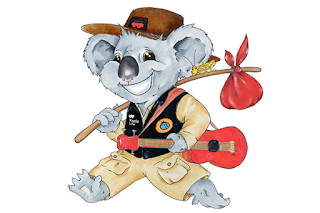 Dorothy Wall’s iconic  classic children’s character, Blinky Bill is delightfully brought to life in the Kobug Theatre Company’s production of Blinky Bill is on the Loose. Bob Kimber’s adaptation offers young and old alike a theatrical treat. With catchy songs by Michael Mills, lively, snappy choreography by Carol Wellman Kelly and directed by Theatrebugs director, Michael Eustace, Blinky Bill is on the Loose Again  begins at the very beginning when his loving Mum Mrs. Koala (Claire McEvoy) urges Blinky (David Salter) to venture forth and learn about the world around him. Watched over by George the Galah (Ali Clarke), a voice high in the Gum Tree above, Blinky sets forth to meet on his wanderings Go-Go Goanna (Jamie Hornsby) and Angelina Wallaby (Chloe Bremner). The versatile cast also double as other characters throughout the play as the venerable Professor Wombat, Spotty Frog, Miss Greenlegs, Bobbin the Bilby and her father Reginald Bilby and his companion, Lady Beatrice Bandicoot. Quick costume changes in front of the audience keep the action alive and on the move. The young audience is constantly reminded that the actors who sit in full view when not on stage are playing their beloved characters.

Salter’s Blinky Bill is the young koala with a blink and a wide eyed naivety, not yet the cheeky Blinky of later adventures, but an innocent susceptible to the big wide world of bush flora and fauna. Kimber’s script remains true to Dorothy Wall’s characters with the exception of his own invention, the mean and nasty Vandals, Axe ( Jamie Hornsby), the destroyer of the trees and koala habitat, Flame (Chloe Bremner), the perilous bushfire that ravages the countryside each Summer season and Mrs. Grab with her moneybag (Claire McEvoy), the avaricious developer who drives the koala from its habitat. Sinister and dangerous, the trio of villains teach the young and unschooled Blinky the dangers of the bush and the threat that exists to conservation of our precious natural environment. Blinky learns the importance of friends on whom he can trust and rely on to rescue him or instruct him in the ways of the bush. When he discovers that he is unable to swim while attempting to cross a river, it is his friend Angelina Wallaby (Chloe Bremner) who is there to haul him from the water. Kimber’s script has achieved a fine balance between the importance of lessons that he learns, the friends that he meets and the dangers that he faces in a story to keep the young audience captivated from beginning to end.

From musical director Michael Mill’s opening foot tapping, catchy number of On The Loose Blinky Bill on the Loose romps along, bursting with the colour and movement of Carol Wellman Kelly’s bright and bouncing choreography and Michael Eustace’s clever comic business with just the right dash of slapstick and a good dose of care for the adventurous koala. In a show that avoids any vestige of patronizing moralizing, Kobugs Theatre Company involves the audience in participation that keeps them engaged and involved as they earnestly warn Blinky Bill of the Vandals and gleefully join in the chorus of Hip Hop Clippity Clop under the direction of Mrs. Spotty Frog. An excellent, multi-talented cast sing, dance and act their way into the hearts of the audience, bringing Dorothy Wall’s story to life in this appealing adaptation while actively encouraging us to care for the plight of the koala. As Blinky faces the dangers of the bush, we are aware of the need to protect this iconic and beloved Aussie animal from natural and human dangers.

Blinky Bill is on the Loose is a cheery, fun-filled co-production of Koala Life and Eustace’s Theatrebugs Drama Academy and deserves to be let loose on audiences of young and old koala lovers everywhere.