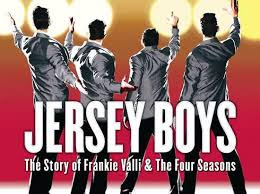 For those of us who grew up in the 1960s, ‘The Four Seasons’ singing group were a phenomenon.  Radio stations played their songs constantly and the words of the songs were forever imprinted on our minds.  Our parents hated them, of course, which only made them more fascinating.  ‘He sounds like a girl’, I remember my father dismissively saying of lead singer, Frankie Valli.

We didn’t know the story behind The Four Seasons back then, but in telling their story, the musical, ‘Jersey Boys’, doesn’t flinch from the raw, tough background in New Jersey that these four singers came from.  Each member of the group tells the story from his own perspective, giving an added depth to this tune-filled ‘jukebox’ musical.  The show ran for over 4,000 performances on Broadway, winning the Tony Award for Best Musical in 2006.

Performers playing The Four Seasons have to be able sound like the originals vocally but they also have the formidable job of acting these colourful and uncompromising characters with depth and believability.  Jared Newall, Dave Smith, Jonathan Rush and Zach Johnson all give excellent performances in the roles.

The guys are given strong support by a large ensemble of performers playing the various characters encountered along the way.  The distinctive New Jersey accent has been achieved by everyone and they display a strong sense of the period in which the action takes place.

Set design for this show with its constantly changing scenes is a challenge which Ian Croker has successfully managed.  The projected scenic art adds considerably to the action onstage.  The director keeps the action moving swiftly from one scene to the next with great skill.

The lighting of this show is particularly well done.  Designed by Joe Cox, there is a distinct difference between the spectacular look of the concert scenes and the gritty real-life scenes.  The follow spot operators did especially fine and accurate work on opening night.

Sound design by James McPherson enabled everyone to be heard clearly and the sound balance on the musical numbers was just right.  Choreography by Madelyn White was nicely reminiscent of the 1960s period and performed well by the large cast.

Musical director, Caleb Campbell, has achieved a spectacular result with the distinctive sound of The Four Seasons as well as the high standard of singing by the rest of the cast and the playing by his orchestra.

Director, Jim McMullen, has produced a highly polished show that shines in every aspect, giving the audience a truly memorable experience.