These two separate exhibitons are quite different, but are connected as they each address issues of human consumption.

Babacar Traore (aka Doli), a photomedia artist based in Dakar, Senegal, explores waste or, if you prefer, refuse. He searches through the streets where he lives and takes snapshots of discarded rubbish. Then he digitally reworks the snaps, giving them new life and presenting us with his original vision reflecting life as it is. The exhibition is aptly titled (in English) The Man/Humankind and his/its Environment.

Traore refers to himself as a neighbourhood photographer who is interested in the arts. He expresses himself through various mediums, including photography, painting, installations, performance art and writing. A video tells us (in French with English subtitles) that Dakar is a very lively and vibrant place of over three million people, of which Traore is a witness. He refers to writing poetry through his photographs, as he tries to present an original vision reflecting life there.

A catalogue tells us that the five works displayed by Traore are ‘photography and digital paint painted on photographic paper’. In her catalogue essay, Jennifer Houdrouge explains that Traore ‘decomposes the scene in 5 sequences similarly to mythological narrative structure: dusk, early morning, zenith, afternoon and dawn’.

Each artwork is incredibly vibrant. They are full of colours, dots, and compositional geometric and circular lines – added by a lengthy digital painting process. Contemplating them, we can amost hear the sounds of the Dakar sreets even though we have never been there.

In other parts of the gallery, Katrina Stamatopoulos, a Greek-Australian artist based in London shows us thirteen large hand-painted emulsion works on a traditional printmaking paper, along with a three-part video filmed at a number of farm locations in NSW. These works are all about our relationship with the animals we eat. Stamatopoulos invites us to meet the meat as it were – see the livestock that is killed for most of us to consume. This exhibition is also aptly titled, Preying for Modesty (Meatheads).

The black and white handprints on emulsion coated paper are not artworks that I would display in my home. I found them confronting, no doubt as intended. They feature reincarnated packaged cuts of meat as human heads. The packaged cuts were sourced from big chain supermarkets, local grocers and farmers’ markets. In other words it is just what we might purchase ourselves. 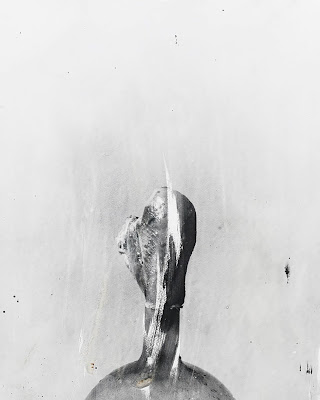 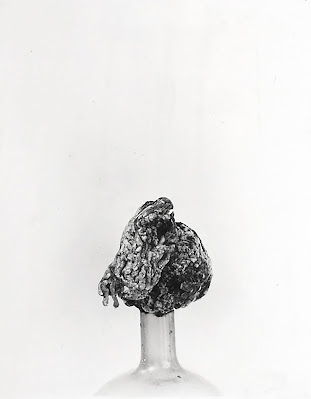 Katrina Stamatopoulos, Meatheads #4, 2020
For some, the exhibited video also may be confronting as it shows farmers carefully butchering animals they raised themselves. Having spent some years of my childhood and youth living on farms and observing such practices, I did not find the video uncomfortable. Nevertheless, it raises questions that need to be considered.

Benjamin Carey’s catalogue essay suggests we ‘might look down and ponder our own hands and feet’ and ‘that, but for colour, texture, and heartbeats per minute, our material is the same, our blood and skin and sinew the same, and our captivity in fields between birth, barcode and beloved care…the same’. I’m not sure that I would go quite that far but, currently being on an enforced diet that has eliminated most meat, I am probably less inclined at present to consider such a comparison than you might be.

I would sum up this exhibition by quoting from a promotion for a scheduled artist in conversation event relating to it - ‘Just like a burp, connected ideas need a release’. So, I would suggest these two exhibitions are connected ideas released for your consideration.