THIS IS US: A MUSICAL REFLECTION OF AUSTRALIA 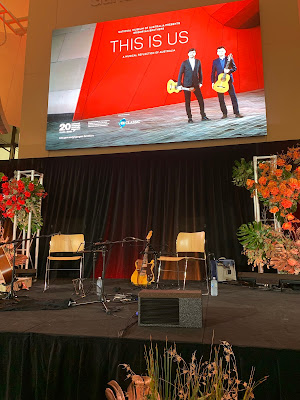 A concert at the National Museum of Australia, the Grigoryan Brothers’ “This Is Us: A Musical Reflection Of Australia”, truly celebrated the Australian spirit.  For the large audience in the cavernous entrance hall of the museum, the concert became an intimately shared and ultimately memorable experience.

Commissioned by the National Museum to compose a suite of music to celebrate its 20th anniversary, the Grigoryan Brothers, Leonard and Slava, focussed on 18 objects that, to them, represented what it means to be Australian.  They chose artifacts that represent our First Nations’ history as well as colonisation, migration and innovation, along with stories of love and loss.

The brothers’ technical skill is now legendary and their new composition produced colourful music of great variety, filled with a wide range of emotions and a fine musical evocation of Australia, the people and its history.  It was an exciting experience watching them play while so thoroughly immersed in their music.

“Love And Forgiveness” focussed on a gold mourning locket owned by early 20th century boxer, Les Darcy’s first love, Winnnie O’Sullivan.  This moving work evoked a strong sense of tragedy and a feeling of time running out for a young man who died so young and was so deeply grieved for.

By contrast, “Song For The Road” celebrated the prototype of Australia’s beloved Holden car from the 1940s.  Bright, speedy and with jazz and swing elements from the era, this was a sheer delight.

“Stolen” was inspired by a dilapidated metal gate from the Kinchela Aboriginal Boys Training Home in Kempsey NSW.  One of the most moving pieces in the concert, the music showed the tragedy behind the artefact, but also gave a sense of resilience and optimism.

Towards the end of the concert, “Our Land” was presented as a reflection on the history of land rights activism.  Building to a powerful emotional climax, it underlined the frustration of the slow pace of change.

Every other item in the concert strongly illustrated the various facets of the past that make this country so culturally unique.  The Grigoryan Brothers’ superb suite of music made it clear that being a part of Australia’s rich history was something to feel deeply proud of.

This review was first published in the Canberra CityNews digital edition 12 March 2021.