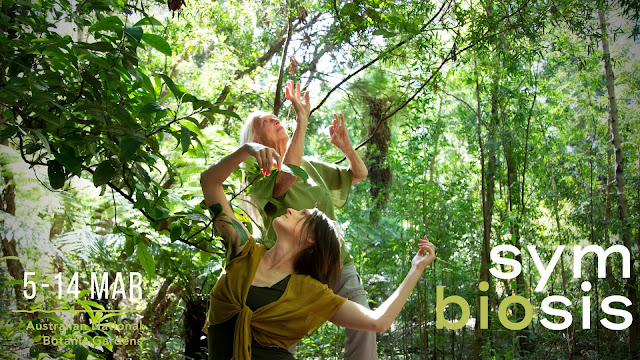 The Australian National Botanic Gardens proved the perfect environment for a work inspired by “the interaction  between different organisms living in close physical association”, and the resulting work provides an unforgettable experience, that is  never less than intriguing, often very beautiful, and occasionally even laugh-out- loud.

Essentially a walking tour offering the rare opportunity to experience the mysteries of the Australian National Botanic Gardens by night, the audience willingly falls in behind the raffish Ishi Botanist (the always intriguing Liz Lea not too heavily disguised) a jolly fountain of knowledge who takes care of the house-keeping announcements and points out plants of particular interest carefully annunciating their correct (??) botanical names.

Filing down into the rain forest where the boardwalks have been transformed by tiny lights into   into a magical fairy-land, the audience armed with hand-held lanterns became part of the environment forming a pretty lantern procession which snaked around the undulating tracks to the sounds of chattering cicadas.

Occasionally a softly- lit apparition, breathing gently but audibly among the greenery, would startle the passing procession.  Arriving at an overhead platform the travellers  paused to watch members of Somebody’s Aunt gently waving arms or rolling on the paths below suggesting organic activity.  Further on they paused again at the sight of  Ryan Stone performing an athletic homage to a stand of tall gumtrees to the accompaniment of evocative words intoned by poet Melinda Smith.

Leaving the magical rain forest, the travellers began a leisurely meander through the gardens where they were startled by Alison Plevey’s snarky water dragon before discovering Olivia Fyfe perched on an aged tree trunk around which she performed a series of improvisations to the evocative sounds of Alex Voohoeve’s electric cello.

Moving on through the gardens to the next location an unkempt old gardener was spied carefully tending the plants. Closer inspection revealed dance legend Elizabeth Cameron Dalman, unrecognisable under a huge drooping hat.

Another pause, this time to marvel at Levi Szabo performing  an acrobatic  bone-cracking set of variations among the embracing  branches  of a large tree, and then continuing on to discover Alison Plevey among some native shrubbery where in the guise of a manic robotic secretary,  she performed an extraordinary  sketch satirising  government inertia in reacting to environmental demands. The final destination was a large clearing where the entire cast came together to perform a massed finale to an appreciative applause.

Intriguing, tantalising, thought- provoking and entertaining “Symbiosis” is another strikingly original work from Australian Dance Party. For those willing to engage with the environment it offered a moving experience. At very least it provides a unique and captivating perspective on one of Canberra’s most treasured attractions. With some judicious trimming of the longer segments it could, and should, become a permanent feature of the annual Enlighten Festival where it has the potential to become an unmissable attraction. But don’t risk a wait, experience it for yourself before the season ends.

Posted by Canberra Critics Circle at 11:22 AM