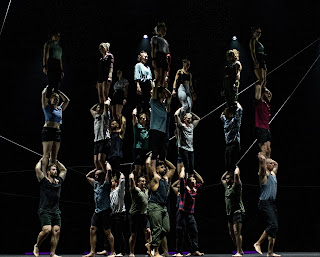 Gravity and Other Myths and Aurora (ADELAIDE YOUNG VOICES).

Absolutely phenomenal! There is no other word to describe the exhilaration and sheer awe and amazement inspired by The Pulse.  In a remarkable collaboration of talent and skill and body and voice, Gravity and Other Myths with the Young Adelaide Voices of Christie Anderson’s Aurora have redefined the art of acrobatics, not just as a display of balance and tumbling but as a well-spring of the human spirit, soaring to the heights of their art form and transporting the audience into a magical realm of wonder and amazement. Because of Lockdown and the inability of the three core ensembles of Gravity and Other Myths to undertake their international tours, the company of young performers combined with the thrilling Aurora singers to present a performance to blow the mind and scale the very heights of athleticism and gymnastic artistry.

It is not just the balancing acts, trust falls and body throws that captivate with astonishing suspense and heart-stopping gasps the audience transfixed by a performance that transcends the customary expectations of physical theatre and Newton’s  very laws of Physics . The Pulse transports the audience to a new horizon of wonderment. It begins with anticipation as the curtain slowly rises to reveal an empty stage except for the occasional pieces of gym equipment dotted about the back of the stage and illuminated by shafts of arrows designed by lighting maestro Geoff Cobham. A solitary figure dressed in black enters the stage. Another dressed in white appears and the song begins to the count of the warm-up chant 1121123211234321 as the choir assembles and the members of Gravity and other Myths pattern their walks about and through the stage, falling on impulse, rising and reclining, tracing one way then another. Anticipation heightens in an air of curious expectation. Like Sirens of the stage, Aurora, conducted by Christie Anderson lure the acrobats to their destiny, thrusting them back and forth and into a woven web of physical intertwining, constructing and dismantling physical constructions.

Like the building chant, the bodies form towers of three that then collapse or slide smoothly to the ground, a fluid passage of grace and control. It is the dance of the acrobat, mesmerizing and uplifting. Gradually the pattern emerges as a tantalizing orchestration of Anderson’s ethereal vocal soundscape and the performer’s somersaults, backflips and break dance movements. Anderson is the sorceress , singing her song of sorcery. It becomes difficult to distinguish between the acrobat dictating the song or the singer the physical response of the performer. They are in perfect symbiosis

.“I feel something dangerous is about to happen” a voice can be heard from the stage. It is the voice of anticipation as two towers face each other while Anderson conducts the chorus of voices that build the suspense. Nothing does. The Pulse is more than a well-rehearsed demonstration of amazing physical skills. It is a salute to the Ensemble, a testament to the power of trust and a moving expression of love. The performer brought to the ground from the towering height that she has scale, acknowledges with a smile, a word a touch the support and love of her companions. The performer who scales the mountain of bodies in a running leap and lands safely on the other side thanks  those whose support he knows he can rely on.

Director Darcy Grant has embraced the risks, the challenges, the dangers and the flights of the imagination and has entered a new world that redefines physical theatre as an artform that with the harmonies and rhythms of Aurora and composer Ekrem Eli Phoenix’s music reaches deep into the human psyche and spirit. What The Pulse inspires in us is hope and a faith in the human spirit to reach out and survive. If these young performers, talented as they are beyond our expectations can instruct us in the power of hope, then the audience lucky enough to witness their amazing, groundbreaking show can be confident of a brighter future. The Pulse doesn’t miss a beat and keeps the human heart alive.

Posted by Canberra Critics Circle at 12:18 AM