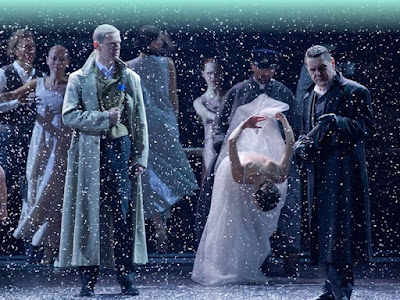 Eugene Onegin. Selected chapters from the novel in verse by Alexander Pushkin.

Live from Moscow, the production is being streamed at 10 a.m.  to Adelaide audiences at Her Majesty’s Theatre at 7 p.m.. On the large screen filling the stage I watch the Moscow audiences filing into the auditorium to take their seats for the production. The grand experiment has begun and two vastly distant communities share their common devotion to theatre as the curtain rises on a vast stage.

A brooding ambience lights the stage and draws us to the dark figure hunched in the corner of a room. It is the old Onegin (Sergey Makovetsky) reminiscing on a forsaken past, bathed in regret and bemoaning the folly of a misspent youth. Gradually Onegin’s life unfolds, a life blinded by the arrogance of youth.

Pushkin’s poetic saga of unrequited love and lost opportunity reverberates with the icy force of a Russian winter, firing the imagination with the visual imagery of his verse and holding the mirror of universal hope and despair up to Nature. His characters breathe the bitter essence of life’s challenges and disillusionment.

At the end of life, Onegin, filled with the regret for the death of his friend Lensky in a duel of honour over the beautiful Olga Larina (Maria Volkova), whom the young Onegin (Victor Dobronrarov) coveted. and having rejected the deep love and devotion of her sister Tatyana (Olga Lerman) Onegin has learnt too late the true nature of life’s meaning. In Tuminas’s version, it is the character of Tatyana about whom the events of Onegin’s life revolve.

Lithuanian director Tuminas remains true to Pushkin while introducing his vision of events to the rich and profound tapestry of Pushkin’s poetic epic. We are taken back to Pushkin’s age in the setting and costuming of this gripping production. We see in the characters of Lensky, Olga, Tatyana and Onegin and Tumanis’s invention the melancholic retired Hussar ( Artur Ivanov) our own humanity displayed in the magnificent performances of Tumanis’s cast. We watch in wonder as the company of the Vakhtangov Theatre instill the production with the very soul of Pushkin’s world and body of his age. Set in a ballet school where the dancers act as a chorus to the lives of Olga and Tatyana, and under the watchful eye of their aged and and infirm ballet mistress (Lyudmila Maksakova). Loss of youth, vitality and talent is at the very heart of Pushkin’s sober message – a nineteenth century Carpe Diem. Age, filled with regret mourns a Life unfulfilled.

Symbolism infuses this production and metaphors paint a palette of meaning to Life’s sombre tapestry. Tumanis’s Eugene Onegin is not all gloom and doom. Ironic humour accompanies the guards’ chase of a rabbit in ballet costume (Maria Berdinskikh and Maria Rival) as they are transporting the women to Moscow. Olga is portrayed with a piano accordion attached to her chest as she sings raucously off key to Tatyana. The absurd image of the ballet mistress being carried across the floor offers a grimmer humour to a production embellished with imagery. In contrast, Tatyana’s nightmarish fear of a bear is related with portentous passion by Irina Kopchenko. Onegin is the bear with whom Tatyana is finally able to dance after she has been married to the prince (Yury Shlykov) and casts off her fear and with it Onegin’s hopes of salvation.

Vakhtangov Theatre Company’s staging of Eugene Onegin is superb. It lures us into the lives of Pushkin’s characters, played brilliantly by a company immersed in the spirit and the story of Russia’s Shakespeare. The performances are flawless, the staging bathed in atmosphere, transporting us to Pushkin’s time and its people.

For over three hours we are carried along by the power of the drama and the passionate parade of its characters under the imaginative, inventive and faithful vision of a great director and the world class Vakhtangov Theatre.

Posted by Canberra Critics Circle at 9:29 AM