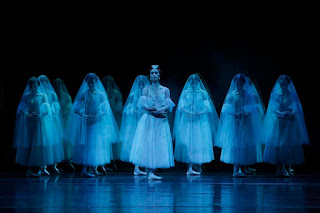 It is night and under the moon a troupe of betrayed brides are lumbering from their graves, clambering through the mist in shrouds of tulle.  These are the Wili, girls betrayed by their lovers on the eve of their wedding.  They now share both their pain and the passion they were never allowed to express in life by waylaying unlucky travelers in a literal dance of death: men who meet them will dance in ecstasy until their hearts stop.

But that is in the second act, defined by the night and romantic horrors.  The first act is about the day, an idyll that celebrates life, the sun and harmony.  Here the maiden Giselle (Ako Kondo) - naive, but with an captivating delight in life - falls in love with her near-twin, the courtly Albrecht (Chengwu Guo).  Giselle is a deer, and Albrecht is the wise hunter who approaches it slowly.  With each gentle footfall closer, he closes the distance between their hearts.

Unfortunately, Albrecht turns out to be Count Albrecht.  That wouldn't be a problem in itself, but Albrecht is also concealing a Countess-to-be, his finance Bathilde (Valerie Tereschenko).

Albrecht can be played many different ways, and we feel that Guo's Albrecht genuinely loves Giselle.  Bathilde has a lot of class, but is hard not to be entranced by Giselle's mesmerising lightness.  But Albrecht and Giselle's courtship also feels too naive, like this might just be puppy love.  True relationships are rarely as graceful as these lovers in dance.  By contrast, the forester Hilarion (Brett Simon) is passionately in love with Giselle, but his abruptness frightens her.  True, Hilarion is prone to occasionally pulling a knife when threatened, but overall he is sympathetic, especially when Albrecht is getting away with behaviour that could at minimum be called sketchy.

Inevitably, this leads to tragedy.  Hilarion pulls the rug out under his rival by revealing Albrecht's true identity and philandering.  Rather than this leading to Giselle's rejection of Albrecht, Giselle retreats into madness, dancing with an imaginary lover now that her real one has betrayed her.  This is followed almost instantly by her sudden death, with both Hilarion and Albrecht devastated that they have killed the person they loved.

But this is not the end of the story, because Giselle is reborn as one of the Wili (despite the strict requirements for membership apparently the Wili have no shortage of suitable candidates).  The death of Giselle is the loss of the sun, and both Hilarion and Albrecht wander into the forest where they fall into the clutches of the Wili, led by their stern Queen Myrtha (Robyn Hendricks - phenomenal in the role, bringing more than a hint of the fierce dance teacher to the part).  Now that the day is past and the community of the village is dispersed, the two men must endure the night alone with their grief.

What follows is extraordinary.  Hilarion is dispatched relatively quickly, possibly because his rough and passionate nature means he has no defense against the mad desire and vengeance of the Wili.  But when it is Albrecht's time to settle his debt and give Giselle the wedding dance he promised, Giselle's spirit intercedes.  She fights the Wili and sustains Albrecht through a brutal (and visually amazing) dance that leaves both the character and the dancer drained.  At dawn (the point where the power of the Wili ceases) we see Albrecht collapsed and gasping for air - but alive - and in a final catharsis we feel as though he has paid penance for his part in Giselle's death.

The dancing is nothing short of spectacular (and very difficult) with many breaktaking performances.  But more than that, the dancing has personality that tells the story.  Albrecht and Giselle are at first too precious to be a couple.  But when separated by death they come to life, becoming more vibrant in their movements and finding a deeper harmony in their differences.  The dead are cleverly and subtly stiffened, their arms now slightly limp in a way that gives a creepy suggestion that they really are corpses come to life.  Giselle's post-mortem dances are like a kind of life in death, like an eerie phosphorescence on a corpse.

The production is a triumph for producer and creator Maina Gielgud, combining mastery of the elements of ballet with a vivid eye for what makes a good show.  I was also struck by how accessible this production of Giselle is.  Rather than a ballet in a language that only experts can decipher, the feeling and meaning in each scene is readily comprehensible in the movements of the dancers (with only the occasional touch of very light miming necessary to move things along).  The Australian Ballet deserves kudos for bringing this amazing production out to Australia.  An enriching and rewarding ballet that for many watching (including this reviewer) will be remembered as the definitive production of Giselle.
Posted by Canberra Critics Circle at 10:55 AM